Every year, when I go scanning the racks at Goodwill for possible Halloween costume ideas, I look in what Goodwill has labeled the costume rack and see things that could be used for costumes and stuff that seems to just get thrown on the rack because it looks bizarre and like it could somehow be transformed into a costume. These clothes get tossed in alongside used ninja costumes without the sword or French maid dresses missing the apron and pinstriped tuxedos that may be used gangster costumes or may be real tuxedos. This can be hard to tell, as with the tuxedo in the pictures below. 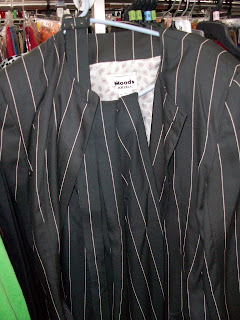 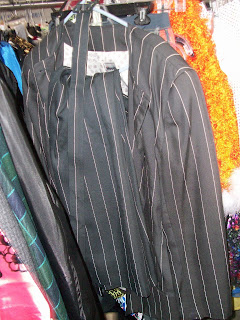 One thing that turns up every year in these tracks are the graduation robes. I once used two of these to make  half-devil/half-angel costume.  A red one and a white one, of course.  I can see red, white, black or even purple robes used for a devil, angel, wizard and such. But what of the orange and green ones? What would costumes might these color be used for? Renaissance dresses maybe? What might you do? 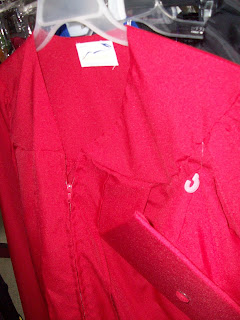 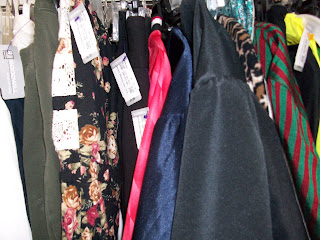 Take a look at this striped dress. I guess you could pass it off as a prisoner costume since it is black and white striped. It's a bit long, but certainly more appropriate that those sexy prison costumes you see for sale at stores and online. 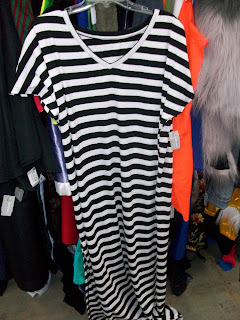 And just what is this multicolored shirt supposed to be used for? It seems to have just gotten put in the Halloween rack because it is so bright and colorful.  A clown costume maybe? But then clown costumes are usually striped or polka-dotted. This would look bit weird, I think. How about you? 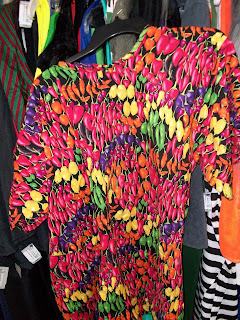 And below is a used lab coat, a real one with an actual person's name and degree stitched into it. I have nothing against using such an item for a mad scientist, doctor or whatever costumes require a lab coat. It's amazing, though how many of these turn up in these racks. 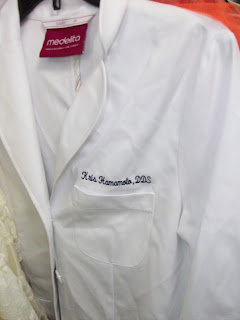 There are certainly other weird and questionable items in what Goodwill calls the Halloween racks. This is just scratching the surface.  In years pasts, I've blogged about this, including here, here, and here.  Same thing happens every year.

And I think I should mention wedding dresses in the racks as well. These seems like something someone might use to be the Bride of Frankenstein or any gothic character, but I personally would have a hard time wearing these out to parties.  If I personally wanted to be a bride character, I would use a white graduation gown, and make it look like a bridal dress. It's be a lot less bulky and easier to wear to more than one event, if that is what you have planned, and easier to repeat for each event than making a toilet-paper bride costume. The toilet-paper bride would also be problematic if rain is expected in your neighborhood on Halloween night. In my neighborhood, you never can tell what the weather in late October will be like. Right now it's still summer-like weather, even though the first day of fall was two days ago. Pretty typical whether in this area.

BTW, I still haven't decided on a costume. It's till only September after all. But I do have some things in mind and will let you know another time.
Posted by Jamie Ghione at 4:31 PM
Email ThisBlogThis!Share to TwitterShare to FacebookShare to Pinterest