Shelf Expression: This week's Assignment from the League

After a few weeks away, I'm posting this weeks' League of Extraordinary Bloggers assignment.  The assignment is:

Post a photo of a shelf of items that displays your love for pop culture. 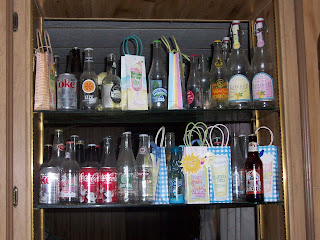 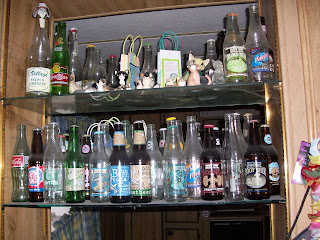 As you can see, there are various soda bottles and some cat sculptures on this shelf.  the two photos are of opposite sides of the shelves, with are in between the cabinets where I keep my dishes.  The front side faces the living room, the other side faces the kitchen.   There are actually more bottles in the middle, not visible in the photo.

I love cats and have on occasion collected tiny ceramic ones.  As for the bottles, well, I just liked how the looked on the shelves and saved  them.  A lot of them came form Bevmo and from my various past and present places of work.  Coca Cola,  Fitz's cola, Topo Chico, Dr. Brown's sodas, Barrilitos, Frostie, among others are represented.

That means the end of Halloween, and time to take down the decorations for another year and wait till after Thanksgiving to put up Christmas.  I'm considering waiting until December 1 since it falls on a Saturday this year, or even the night before.  I'd requested today off from work in advance, so I'd have all day to take down Halloween.  Last night was boring as only one trick-or-treater showed up, and I'm now stuck with sick small bags worth of candy that were on sale at Safeway last night.  Almost all the celebrations for Halloween occurred last Friday and Saturday as is likely to happen when the holiday is on any day but Friday or Saturday.  FYI, 2013 will be the first time it's been on Thursday since 2002.   I'm already wondering when the local karaoke bar will have  their party next year, since they have karaoke on both Thursdays and Fridays. And since I didn't have to get up early today, I already took down my inside Halloween decorations before going to bed, with only the outside stuff to worry about today.  I also have to redesign the blog background for a month.

I can't believe it's already time to start thinking about Christmas, though various retailers have tried to make consumers thinking of such as early as September.  Last night, a "Merry Christmas" banner was already hanging at Target, on Halloween! Even though their Christmas merchandise has already been in stock since September, this was the first I'd seen of this banner, placed so that customers would notice upon entering the store.  Yesterday at Kmart employees were working on stocking more Christmas stuff in the aisles where Halloween had been until last week when it was moved to the front of the store near the entrance.  They'd been discounting Halloween before the calendar switched over to October.

And every November, someone always rants that Thanksgiving has been overlooked.  But it's not really centered on decorations or costumes, mostly on food.  It's like food stores make the most money on this holiday.  Even those who placed fake gravestones or carved pumpkins on their front yard for Halloween and who plan to place a tall Santa on the lawn for Christmas don't seem likely to decorate the yard for Thanksgiving.  Decorations for Thanksgiving tend to be more indoors,  such as table centerpieces. Once again, my family doesn't seem to have anything elaborate planned.  I sense we will got to the see the final "Twilight" installment that day, then head off to dinner somewhere, as we'd done last year.

Well, thanks to all those who participated in the Halloween  Countdown.  It's been fun as always, and I hope to see you all again next year.  Meanwhile enjoy the rest of the year and the coming holidays, and don't forget to vote next Tuesday.  It's a very important election.
Posted by Jamie Ghione at 10:42 AM 1 comment:
Email ThisBlogThis!Share to TwitterShare to FacebookShare to Pinterest
Newer Posts Older Posts Home
Subscribe to: Posts (Atom)