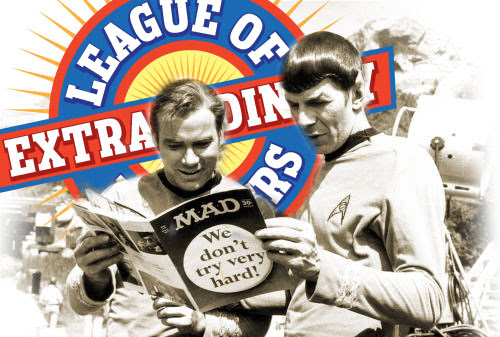 This week's assignment, copied from Cool and Collected:

Fellow League member, Jon over atdoubledumbassonyou, is running a weeklong celebration of Star Trek, in celebration of the new movie coming out this weekend.  Illogically, I asked if the rest of the League could piggyback on his idea. So, in what may be the ONLY week ever devoted to the franchise, this week’s topic for the League of Extraordinary Bloggers is…


A few things I need to say beforehand. I've been on hiatus from the League for a month and have not put anything else on the blog since then. It's been hard coming up with stuff. Also, the recent assignments have been a little out of my league (so to speak, but implying a different meaning here). I also have to admit "Star Trek" just isn't one of my things. I've never obsessed over the show or seen any of the movies, and won't be headed to see the latest movie in the franchise this coming weekend. But I do have a way to contribute to this League Assignment. When reading over this assignment, two things recently occurred to me.

One was something to do with some long-time family friends and their old orange tabby cat. I recently Googled something about "Star Trek." Now what does this have to do with "Star Trek" you may be asking. Well, the family's cat was called Fizzbin. Their son named him this, and his parents said the name came from "Star Trek." The cat was alive during the pre-Internet age, so finding about Fizzbin was virtually impossible at the time. Back then, I just assumed the name was spelled "Fizzbin," a simple, phonetic spelling. But there was also the possibility that there was some fancy spelling like "Fizzbyn," or "Fyzzbyn." Again, this was during the pre-Internet age, and the boy's father said I might be able to find out about Fizzbin in a "Star Trek" trivia book or something like that. I'm now kind of wondering if such a book has ever existed, but I won't be searching for one.
I'd nearly forgotten about the cat and his name until a while ago, when his name re-entered my mind. When I suddenly remembered all this I googled "Fizzbin," thinking that spelling was a safe bet. Turns out it's the right one as I found the following on Wikipiedia:


Fizzbin is a fictional card game created by Kirk in the Original Series episode "A Piece of the Action". While being held hostage on Sigma Iota II with Spock and McCoy, he spontaneously invented a confusing card game to distract the henchmen guarding them.


The rules were intentionally very complex. Each player gets six cards, except for the player on the dealer's right, who gets seven. The second card is turned up, except on Tuesdays. Kirk dealt the henchman two jacks, which are a "half-fizzbin." When the henchman said he needs another jack, Kirk warned that a third jack is a "shralk" and is grounds for disqualification. With two jacks, one wants a king and a deuce, except at night, when one wants a queen and a four.

At this point, Kirk dealt a third jack, but to keep the ruse going, he ignored the disqualification rule he had just made up. He explained that, had a king been dealt instead of a jack, the player would get another card, except when it's dark, in which case he'd have to give it back. The top hand is a "royal fizzbin," but the odds of getting one are "astronomical": when Kirk asked Spock what the odds are, Spock truthfully replied that he had never computed them.

Kirk called the last card a "kronk" and then purposely dealt a card such that it fell on the floor. As the henchman being taught reached down, Spock nerve-pinched him while Kirk and McCoy attacked the other guards, allowing the three to escape.

Once in Deep Space Nine, Quark mentioned the game as a way for him and Odo to while away the time while traveling on a runabout;[9] whether it had become a real game or if it had been a reference was never explained. Playable versions of the game have been invented, and it featured in the episode "Nantucket Sleighride" of the animated series Starcom.

In the iCarly movie iParty with Victorious, Sam Puckett threatens to give Carly's boyfriend a "royal fizzbin" (presumably something like a "Texas wedgie.")

Fizzbin is featured in the second part of Production Number 19 of "Back at the Barnyard", "Otis' Eleven".

Wow, Fizzbin was referenced on iCarly.  Wonder how many kids who've watched that show know about teh original "Star Trek."


Speaking of  the original "Star Trek," the other item related to that subject that occurred to me recently was something that happened six years ago when I was doing a search on Netflix. The search engine now is different that it was in 2007, so what happened at that time might now happen now.  But one day during that time, I punched in the word "yes."  I have listened to Yes (the band), and was always on a Google Groups newsgroup for the band (I haven't been on these groups for so long now, since the format changes have been made it harder to read them).  But anyhow, upon  entering the word "yes" into the Netflix search engine, some surprises came up.  Music videos (some of which I own) for Yes the group came up, naturally, as did various movie and TV show titles containing the words "yes" and "yesterday," such as "Yes, Minister," "The House of Yes," and "Born Yesterday."   But some very strange entries popped up.  I had no idea what any of them had to do with the word "yes," and two of them were "Star Trek: The Original Series, Volumes 1-15," and "Star Trek: The Original series: Volumes 29-40."  I mentioned this on the Yes newsgroup, along with the other questionable entries that had come up (I will mention those later, for those who are curious), and someone on the group sad that the "Star Trek" entries were probably because of two episode titles: "All Our Yesterdays." and "Tomorrow is Yesterday."    I guess that seems right.
For the record,  the other entries that came up on the Netflix search for "yes" were:

Little House on the Prairie: The Movies (one such movie was called"Look Back to Yesterday," so that may be why that one came up, by analogy of what the person said about the "Star Trek" entries)

USMA Cadet Glee Club: Stand Ye Steady: Songs of Courage and Inspiration (This one probably came up because of "Ye Steady.")

Beast Cops and Queen of the Underworld.  I still do not know about either of these.