Didn't have to do jury duty today

Over a month ago I was sent a dreaded jury duty summons for today's date. I had get today off from work, and I let my boss know last month after receiving the summons. Then last night I called the line and was told I was no longer needed. I was glad, but felt I'd wasted a day off, but it wasn't my fault, since I'm sure most of you know how this kind of thing can be.

Since living at my current address, I've been called every three years and since I was last called in 2008, I knew I had a summons coming this year. Not only was I called in 2008, but was chosen to serve. The trial lasted until Thursday that week, and needless to say, I got bored sitting around in the court room. I was nearly asleep on the final day as we gathered in the room to come to our decision. I was glad to get back to work on Friday that week in October 2008. I was glad to not have to got through this all over again. No need to keep calling my boss all week to say when I have to be at the trial. I can just got back tomorrow and tell them I wasn't chosen.
Posted by Jamie Ghione at 5:17 PM No comments:
Email ThisBlogThis!Share to TwitterShare to FacebookShare to Pinterest


It's less than three months away, but it's always around this time that some stores start stocking Halloween merchandise. My town's Dollar Tree has had some Halloween up for some time now. And I saw some Halloween decorations in the floral department at Safeway last week. My own place of work has yet to get any Halloween merchandise, though we always seem to start getting it as early as the beginning of August. Perhaps later this week and if not then then next week. Stores like Kmart and Target are still concentrating on back-to-school right now, but the Halloween can be expected before this month is over.
And as of last week, the annual Spirit Halloween Superstore in Gilroy, California began setting
up. For the last three years they had been taking over the 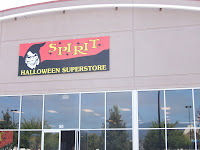 abandoned Linen and Things building, but this year they are taking place in a building left empty earlier this year by Famous Footwear. This building is only two doors to the left of Home Goods (where I have been working since 2006) and to the left of Old Navy. I'd applied for a temporary side job at the Spirit store on its website last month (haven't heard anything) and they'd said their store in Gilroy would be opening next to Costco, meaning they would be in the old Linens and Things building, in the same building strip as Lowe's, across the parking lot from Costco. Imagine my surprise when I pulled out of the parking lot at work last week and saw the Spirit store banner on the former Famous Footwear building. When Spirit opens, I won't have to drive to the store, since I'll be in the same parking lot.
And since last month I've been working on some papier mache ghosts and pumpkins (made from paper bags) that I want to try to sell on Etsy. I'm still working on opening an Etsy shop, and need to learn how to use Paypal. I've already got an Etsy account and have been looking for a way to make a banner for my shop for free on the Internet. Today I found a way to make one and made and saved it on my computer. I'll talk more on this later as I take more pictures of my papier mache creations. I've already chosen several favorite Etsy shops. 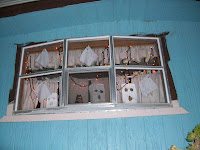 Here are the ghosts I first made six years ago that I have displayed each halloween in my kitchen window. The standing ghost are the ones I made form putting papier mache strips over paper bags.
And I have already been browsing costume sites, especially this one. I feel tempted to get this one, though I could easily make one myself. I've been Googling how to make one myself and came across how one person made the cupcakes using newspaper. That sounds like a good idea and I am considering trying this idea. I have already begun experimenting with strips of newspaper.
So far that's all I have seen and have been doing. More to come.
Posted by Jamie Ghione at 6:09 PM 3 comments:
Email ThisBlogThis!Share to TwitterShare to FacebookShare to Pinterest


The popular cable channel that once carried and popularized music videos was launched 30 years ago today. I was 10 years old that year. My family did not have cable until eight years later and by then MTV had gradually slowed down showing videos. Before getting MTV I'd stay up late on Friday nights to watch NBC's "Friday Night Videos."
Below is a You Tube clip of MTV's launch just after midnight on August 1, 1981:

The first video was appropriately the Buggles's "Video Killed the Radio Star."
And remember these TV ads with various rock stars telling viewers to call their cable providers and demand, "I want my MTV" ?
The music video days of MTV are long gone, and reality shows now dominate the channel's programming. According to this article, the channel used to be cool:

I know it’s hard to believe now, but MTV used to be cool, or at least interesting. Back at the beginning, when there weren’t a lot of videos, they had to play what they got. They had Pete Townshend and Sting (before he was a total prat) doing commercials. They ran Velvet Underground outtakes and local NYC bands and anything, at all, that they could run to fill the time and space. They had “VJ’s” (instead of DJ, get it?) that actually knew something about music. Martha Quinn used to be a dj at WNYU back when that was my outpost to hear about new music, driving home from my after-school job at the medical records department at the HMO. There was 120 Minutes and The Cutting Edge – both of which you would plan your week around, even if you had figured out how to program your VCR – and the old 60′s videos from Beat Club. There was plenty of crap, to be sure, but there was always something worth watching, something worth talking about.

I don't have cable now, but know that a lot of cable channels, along with MTV, have strayed from their original focus. And many music videos from MTV's early days can be found on Youtube.
Here is one look at MTV 30 years later. And another person laments MTV's revolution continuing without a soundtrack in this link. And here the same person remembers "30
Things We Miss About MTV":

30 THINGS WE MISS ABOUT MTV:

Anyone agree? I'm sure a lot of you do.
And by strange coincidence about a week ago, I was looking through my stash of old Rolling 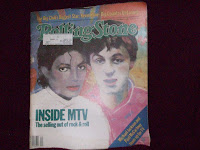 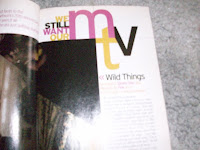 And from the pages of "TV Guide"'s August 4, 2001 edition comes this image (at left) of the magazine's celebration of MTV's 20th anniversary that year, saying "We Still Want Our MTV."
Do you still want your MTV?