And Now It's Here!

Halloween stuff is already at the Dollar Tree, with summer toys being pushed aside and school items still on the back wall and near the window.

I noticed the Halloween and fall items beginning last week and saw even more today. 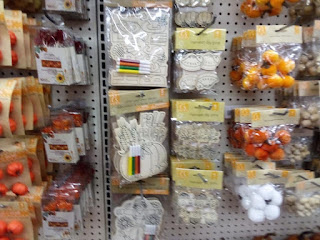 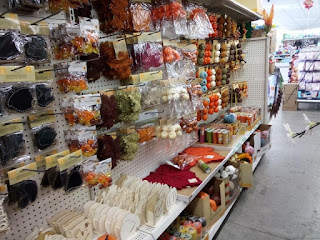 And something weird I discovered among the holiday items on display: A pumpkin spice scented broom: 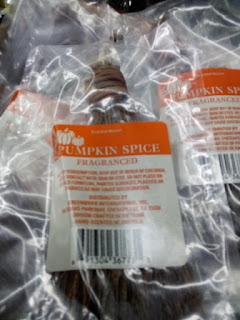 I just had to take a sniff of one of these things. I do not know what this is to be used for.  Yes, almost time for the pumpkin spice scents to come in.
Posted by Jamie Ghione at 7:34 PM 3 comments:
Email ThisBlogThis!Share to TwitterShare to FacebookShare to Pinterest 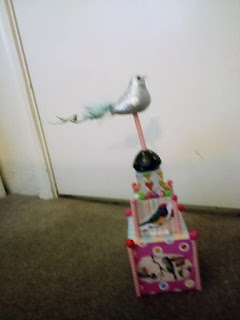 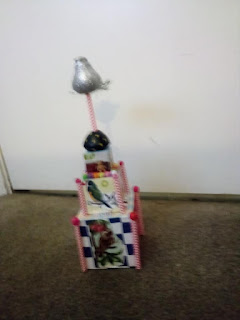 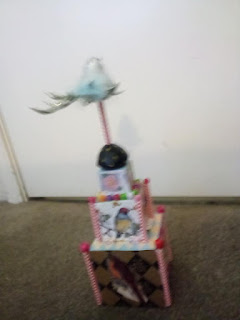 After a few days' delay, I present the next bird assemblage I did. This was done for a project at work. I was unable to get photos of the others done, from extra birdhouses we had on hand.

For the base on this one, I once again used a wooden box with a drawer from Dollar Tree that was in the art supply room at work for the bottom block. I also used some stuff I brought from home, including a foam dice block for the middle block and a small baby shower block for the top art. Once again, I used the striped straws to hold the bird and also to decorate around the edges of each block. Holding he start for the bird is half of some foam Easter eggs. I got those to see how they would wok instead of the dough used previously.  Each side of the blocks was covered by decorative paper, magazine clippings and beads from the center. I also brought the bird from home, a sliver-glitter decorated one made of foam. It was easy to insert the straw into this one.

I let others have the extra foam dice and baby shower block as well as one the remaining red bird and white bird and the egg halves. I still have the other white one myself and some of the foam dice and baby shower block, so I have decided to make one more of these things to use that stuff up. So far, I have only pasted magazine pages on the sides of the blocks and am not yet sure what to put on them.

Posted by Jamie Ghione at 4:02 PM 2 comments:
Email ThisBlogThis!Share to TwitterShare to FacebookShare to Pinterest 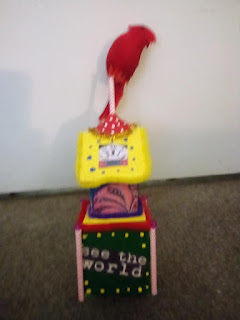 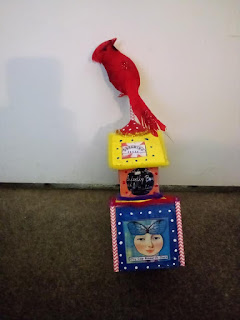 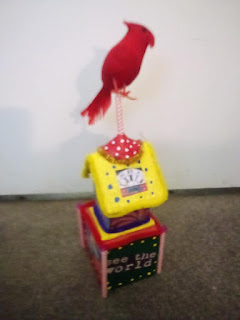 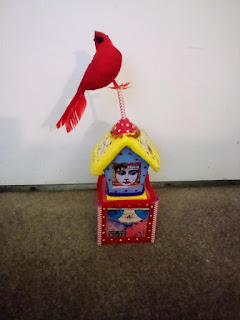 As I said in yesterday's post, I attempted another way to make the bird assemblages I saw on this site, via Pinterest. Making the birds out of the modeling dough (see yesterday) took a lot of work and the stuff does not harden fast. The artist used wooden birds, but I could not find any anywhere. I did however, see leftover Christmas birds at Dollar Tree discounted after the holiday, and got some of those. For the stick on the first one, I used an actual wooden dowel, and made a hole in the bottom of the dough bird to hold it up, but this barely held it. The Christmas birds had wires attached to their feet. I used paper straws this time, as the wires easily inserted into the straw.
In the first assemblage, I'd used a wooden box with a removable drawer for the bottom of the base. I did this again here, each time covering the hole in the drawer. On this one, I used spray adhesive to attach magazine pages to the sides of the box. The top part of the base was a wooden craft bird house which I covered the same way as the box on the bottom. After a base painting of the sides of the box and house, I pasted on vintage images found online. I used the modeling call to cover the bird house roof and make the round base on top the roof to hold the stick with the bird. Once again, the dough took a while to become hard.  A yellow pipe cleaner outlines the roof's edge, and pieces of the straws decorate the edges of the bottom base.
Again, it's been months since I did this, so it's hard now to describe every detail of how I did it all. But there is now real way to do such a thing. And this was not the last one of these I made. The next one is still to come.
Posted by Jamie Ghione at 10:43 AM 3 comments:
Email ThisBlogThis!Share to TwitterShare to FacebookShare to Pinterest

After seeing the idea below on Pinterest, I tried to come up with a way to do it myself. Here is the blog of the artist who made these. It's a rather complicated concept. I know I could not do it the way the artist did, so I had to find my own way to do something similar to this. 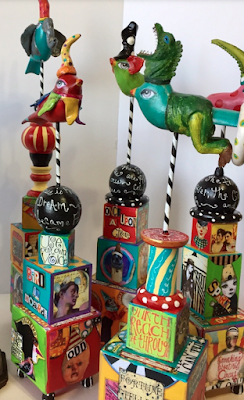 It was a rather complicated process how I first attempted this project using my own ideas. I have one three of these since and am working on yet another.

Below is the first attempt. I tried to imitate the clown theme used by the original artist. The clay I sued is a cheap modeling dough I found at Dollar Tree (the same clay used for some of the paintbrush projects in this post). It takes days to harden and can have cracks, something I did not know when I first bought the stuff. 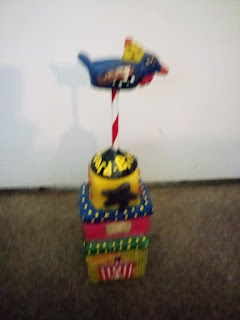 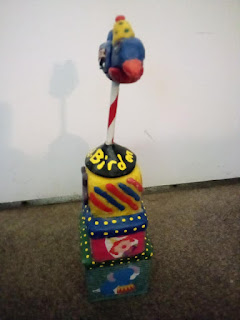 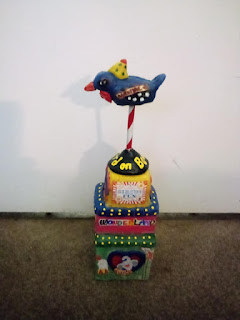 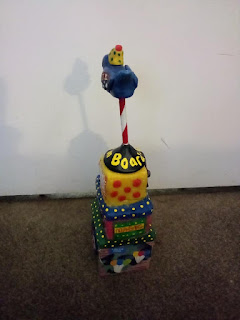 I took pictures at at all four angles of this project. Most of the images on each side were printed from the Internet, some I drew myself.  I used wooden blocks, some from Dollar Tree and some I already had a t home (kids blocks from the Goodwill). The bird was made from the clay with printed images pasted on.

It's been months since I did this, but I did not get around to posting them until now. Long story as to why that is. Only now did I decide to share these. Again, the process was a complicated on this one. The others I did a little differently. I plan to show each of the others in separate posts, so as not to have so many photos in one post. The process I did for the subsequent ones was something else entirely. It would take too long to explain it all in this some post. Keep watching for the next ones.

Posted by Jamie Ghione at 5:35 PM 3 comments:
Email ThisBlogThis!Share to TwitterShare to FacebookShare to Pinterest

Earlier this month, these displays began showing up at Dollar Tree (I like to take advantage of back-to-school sales to get notebooks and pens for myself. I just got some packs of pens 2 for $4 at Safeway): 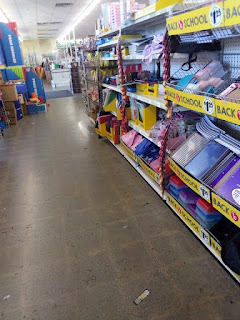 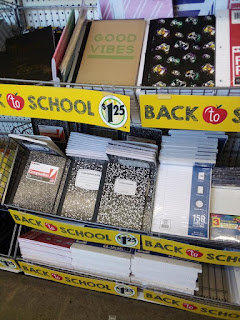 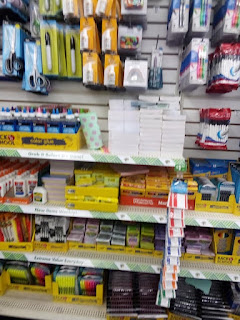 And just a while ago this began appearing at the same store: 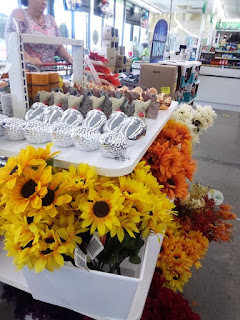 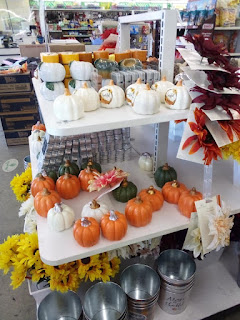 And I was reminded today on Facebook that this is coming: 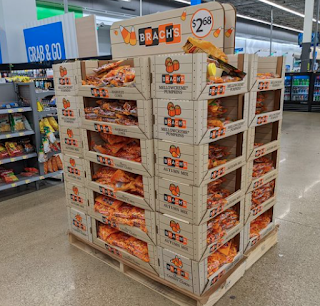 I haven't seen this yet, but I know it won't be long now. I still can't believe it's getting closer to that time.

The still uncertain state of the virus has me wondering what the holiday landscape will be like this year. Will going out for Halloween be safe? I avoided it last year since the virus was still looming then. We are now open longer hours at the center, so maybe will will get to do more for Halloween this year (it's on a Monday, BTW), besides watching a movie like last year--this took up nearly the whole time, since were only open two hours then. I'm sure we can do more, as long as we do it safely. It's still early to be thinking about this, but it will all be here faster before you know it.

Posted by Jamie Ghione at 6:43 PM 2 comments:
Email ThisBlogThis!Share to TwitterShare to FacebookShare to Pinterest

This past month, I dug out the writing kit I'd bought years ago when working at Home Goods. As I said in this post, I wasn't sure if I was doing exactly what each daily card said. Not all of what I wrote each day seemed to connect, and I haven't looked back to see if anything that came out of each session interests me enough to  attempt to revise. But I guess it was worth trying. 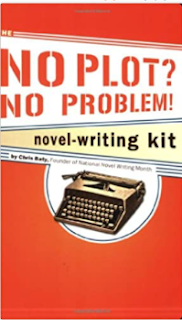 Have any of you out there ever attempted the NaNoWriMo in November? Whenever I hear about, it sounds daunting. I never even think to attempt this event. This kit is by the founder of this yearly event, and the idea is the same---to write a 50,000-word novel in a month. I don't think I got that many words, and don't even want to estimate, let alone try to count each one. Does anyone actually count stuff like this anyway? I was sure I would not be able to write a complete novel in just one month, since many people take years to complete novels.

I recently dowloaded a free novel-writing kit, but have yet to even look through it all. And I have been looking at such items on Amazon, but am unsure about getting any just yet.

Posted by Jamie Ghione at 8:52 AM 2 comments:
Email ThisBlogThis!Share to TwitterShare to FacebookShare to Pinterest

Here is the emoji-themed bingo card for July. 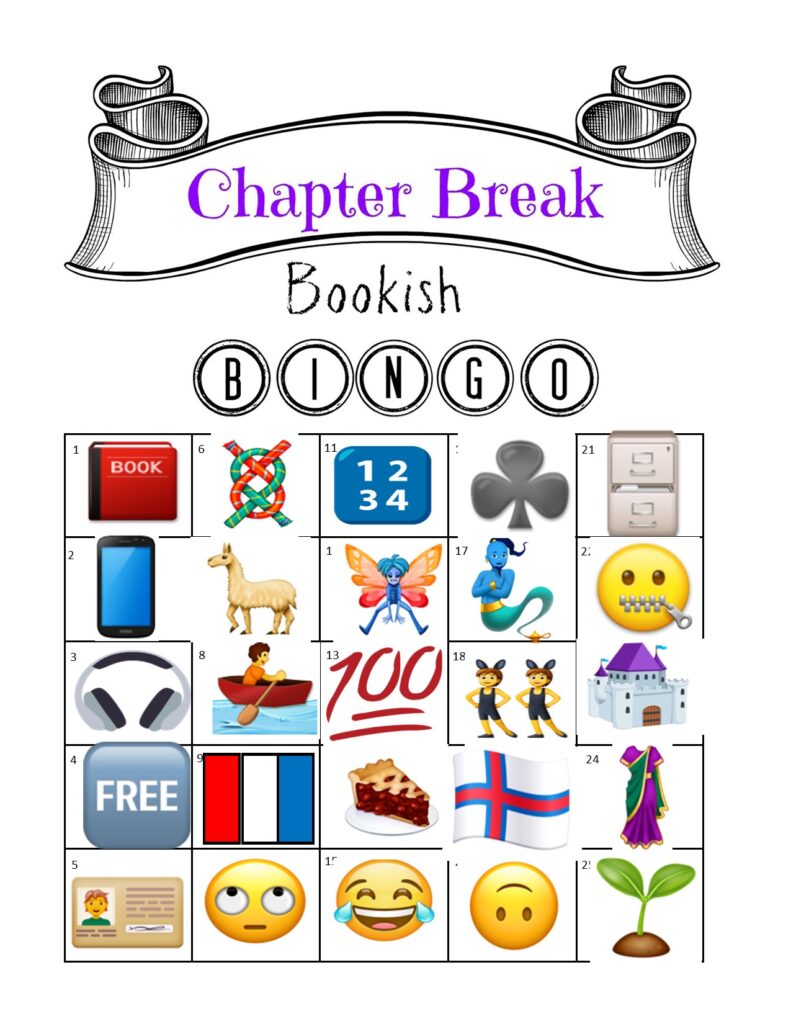 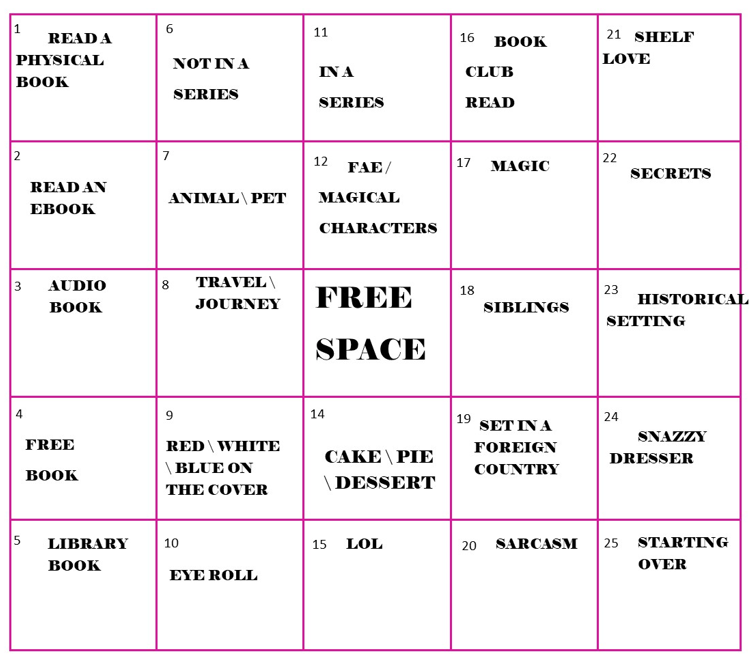 My Books:
25 squares completed on July 14
Posted by Jamie Ghione at 6:36 AM 3 comments:
Email ThisBlogThis!Share to TwitterShare to FacebookShare to Pinterest
Newer Posts Older Posts Home
Subscribe to: Posts (Atom)