You Should Be An Angel

The Halloween Costume Generator
Blogthings: Free Quizzes for Everyone
Yes, I agree an angel is always a good costume and a classic one. But it's still a bit ordinary
Posted by Jamie Ghione at 7:06 PM No comments:
Email ThisBlogThis!Share to TwitterShare to FacebookShare to Pinterest

What Part of Fall Are You?

What Part of Fall Are You?
Blogthings: Cheaper Than a Therapist
And I never even drink this stuff!!
Posted by Jamie Ghione at 6:58 PM No comments:
Email ThisBlogThis!Share to TwitterShare to FacebookShare to Pinterest

Apologies for no pictures yet..

of my Halloween decorations as I said I would the other day, but I hit a little problem last night and was unable to shoot any pictures.  But at some point they will be on my blog as part of the Halloween Countdown.
Posted by Jamie Ghione at 4:51 PM No comments:
Email ThisBlogThis!Share to TwitterShare to FacebookShare to Pinterest

Temporarily, for the coming month of October, as I will be one of the bloggers participating in the Countdown to Halloween.    I wanted my page to look spooky for the occasion.   I first participated last season (I'd started my blog in December 2008), and enjoyed and am looking forward to doing it again.  I and other participating bloggers will be  posting different Halloween-related entries in the coming month.  I've already  been getting a jump on preparing for the occasion by decorating the outside of my house this weekend, enduring a hot weekend.   I wanted to get them up before the first of next month, but with the first on Friday and with having to work on weekdays, I chose to start this weekend.  I'd done the same thing last year, with the first falling on Thursday and having only weekends off.  The weather was just as hot then as it is this weekend!
To kick off the countdown, I will  shoot some pictures of my decorations to go up on my blog tomorrow.   Sorry, too tired today and it took me all yesterday afternoon to crumple newspapers for stuffing my bag spider and pumpkins.  My Halloween lights went up today, with some suction cups bought at Dollar Tree. The person at the store had no idea what these things are called, but was able to find them based on my description.
See all you countdown  participants in the next few days!
Posted by Jamie Ghione at 6:51 PM No comments:
Email ThisBlogThis!Share to TwitterShare to FacebookShare to Pinterest

What Color Crayon Are You?

What Color Crayon Are You?
Blogthings: Take a Quiz. Annoy Your Friends.
Posted by Jamie Ghione at 7:41 PM No comments:
Email ThisBlogThis!Share to TwitterShare to FacebookShare to Pinterest

It may be the end of summer...

... but it's still sunny where I live.  Then again, it's California and they don't call it "Sunny California" for nothing.  Fall may have started two or three days ago, but I'm not ready to retire my shorts and bring out my socks just yet.  If you live in Cali, don't be surprised to see others doing the same thing.  Who knows how much longer this summer-like weather will last, even though the first day of October is a week from today.   And this weekend, I plan to decorate the outside of my house for Halloween. I'm starting early since the first of October is a Friday and I work each weekday next week; I did the same thing last year since the first was a Thursday then.  Can't believe it's already that time of year.
The summer here was a bit sunny, but to some it did not feel like summer.  In fact it feels more like summer now (to me at, least) than it did prior to the fall equinox.   And with money getting tight, I did very little this summer, but did get to see several of the summer blockbusters at the theater.  I did little driving out of town, except to work.
I am now waiting to see how many more sunny days we have.  Weather in the 90-degree range is expected for the next day to two.
Posted by Jamie Ghione at 5:38 PM No comments:
Email ThisBlogThis!Share to TwitterShare to FacebookShare to Pinterest

The Paint Daub Test
The First Rule of Blogthings Is: You Don't Talk About Blogthings
Posted by Jamie Ghione at 5:34 PM No comments:
Email ThisBlogThis!Share to TwitterShare to FacebookShare to Pinterest 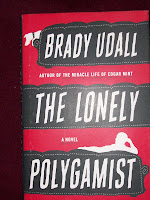 I'm not one of the best reviewers or critics in the world, and I almost never make an effort to try to review something,  as it's not one of the things I'm compelled to try.  But I decided to give it a go, having just read this book .
I first learned about this book through the review in the San Francisco Chronicle at the end of June and sought the book out two months later.   I suspected I'd like the book and I was right.
The lead character, Golden Richards,  is the husband to four wives and father to 28 children and is a building contractor for a failing construction business.  The only construction  job he's able to get is in Nevada, 200 miles from his Utah home, and it's a for a whorehouse (he lies and tells his family and church community that he's building a senior center).   The job keeps him away from home and his family for hours, even days; hence his loneliness.  While he's away at the construction site, he begins to fall for another woman and eventually has an affair with her.   He's grieved over the death of a daughter and a stillbirth of a son. With both his family and his business falling apart, he's having a midlife crisis.  We also learn a  little of his lonely, isolated childhood and how he was led into the polygamist lifestyle.
The books also tells the viewpoint of Trish, the youngest of the four wives, who has brought her daughter from her previous marriage into the family and who suffers the stillbirth (she'd had two stillbirths during her prior marriage as well).  She too feels lonely in the crowded family.
Another viewpoint presented is that of Golden's son Rusty, one of the children from the title character's third wife, Rose-of-Sharon. He's known as "the family terrorist" and is the only one of the children not living with his biological mother.  He becomes involved with a neighbor who builds bombs and is often kept from leaving the house by Beverly, the first wife, with whom Rusty is living.  He is desperate to see his biological mother.  Rusty, the least popular of the many children,  also feels lonely in the crowded family, and feels neglected by his father, whom he refers to as "Sasquatch."
Beverly is the one who runs the family, and Nola (wife #2) and Rose-of-Sharon run a hair salon. The family is spread apart over three different houses.   A family tree of all the wives and children is provided at the beginning of the book.   The story is set in the late 1970s, evidenced by references to the Bread (the band), the Captain and Tennille, "Disco Inferno,"  Postum and "Starsky and Hutch."
The book is nearly 600 pages long and it took me over two weeks to finish, but it was worth that amount of time.   Having come home form a tiring day after buying the book, I was only able to read the first seven or eight pages that day before getting sleepy, but that was enough to get me hooked that first day.  Over the next two weeks, I read it pieces at time, when I had time to lie down.  This included being laid up with back pain on Memorial Day weekend when I alternated between reading the book and watching DVDs.
Not too many people I know have heard of this book.  Having mentioned it in my status on Facebook shortly after beginning to read the book, only one person commented asking what the book was about. One family member remarked that it sounded "intrinsically interesting," something that open to interpretation (I still don't know what that was supposed to mean).  A friend of the family remarked he had not heard of the book (I asked him in an email with the link to the book above), but that it sounds interesting.
Overall it's a great read and I highly suggest anyone read it.
Posted by Jamie Ghione at 2:37 PM No comments:
Email ThisBlogThis!Share to TwitterShare to FacebookShare to Pinterest

Quiz: "Who Were You in Past Life?"

I thought this was funny!!!

Who Were You In a Past Life?
Work is Hard. Time for Blogthings!
Posted by Jamie Ghione at 8:54 PM No comments:
Email ThisBlogThis!Share to TwitterShare to FacebookShare to Pinterest

...yet it's September.  It's almost as if we didn't have a summer this year.  It's been warm and sunny enough to wear shorts  yet until the end of August, the weather never seemed to be over 90 degrees. Thankfully in my area of California,  we mostly missed the 100-degree weather mark.  It was that hot several times in 2006 and at least once in 2008 (on the first official day of summer that year, incidentally).   I went to the Seaside-Marina area on the last Thursday in August and it was a bit cold, but then it's near the ocean so it often gets quite breezy in that area.   There were a few days in July on which I felt compelled to out on long pants as  I went with family to a movie on one of those nights.
It's too bad that it was such a beautiful weekend for the Labor Day Holiday.  I rarely have a three-day weekend from work except when there is a Monday holiday.  Coming home from work on Friday afternoon I began having back pain which had me laid up for most of the weekend.  I most all of Friday afternoon lying on the couch. One thing I did then was watch "Grey Gardens," which I received from Netflix that day and later reading the book "The Lonely Polygamist," which I got almost two weeks ago (am still reading it).  Saturday was more of the same, reading my book and watching DVD while laid up on the sofa again.   I was finally able to get out today to see a doctor, then go to the grocery store.  My back  pain is starting to get better and I have one more day off. Hoping to get better.
Posted by Jamie Ghione at 5:45 PM No comments:
Email ThisBlogThis!Share to TwitterShare to FacebookShare to Pinterest

What Color is Your Birthday?

What Color Is Your Birthday?
Blogthings: Our Quizzes Weren't Written By Bored 12 Year Olds
Posted by Jamie Ghione at 3:41 PM No comments:
Email ThisBlogThis!Share to TwitterShare to FacebookShare to Pinterest
Newer Posts Older Posts Home
Subscribe to: Posts (Atom)