You Know Summer is Dying Down When...

...when you see school supplies getting reduced down to 60 cents each.  Today is the last day before most of the kids in my town go back to school.  I certainly am glad to have gone to school when I did because I cannot imagine going back to school in mid-August.   For me back in the day, mid-August was the end of summer and school began either before or after Labor Day.  And once school gets underway, the supplies will be reduced even more and it will be time for the Halloween merchandise to be stocked.

Which reminds me.  I recently applied [but did not hear from ;( ] the temporary Halloween retailer Spirit Halloween. Many of you know that these are the temporary Halloween stores that take over some storefront that's been empty for some time.  I have the misfortune of living in a town that usually does not get one of these stores.  We had one in 1999, but it did not return thereafter.  So imagine my surprise when I went to their online application and saw a listing for Spirit Halloween in my hometown, a town with very little to do, something any resident will attest to, including myself.   I had to wonder if this was for real.  At the end of June,  Staples (which came to Hollister in 2000) closed down its store in our little town.  The Spirit store website said it would be opening in the building where  Staples had been.  I seemed hard to believe that we would be getting a Spirit store and I wondered if it was really going to happen.  Last weekend, however, I drove past the building and saw the Spirit "coming soon" signs in the building's windows. 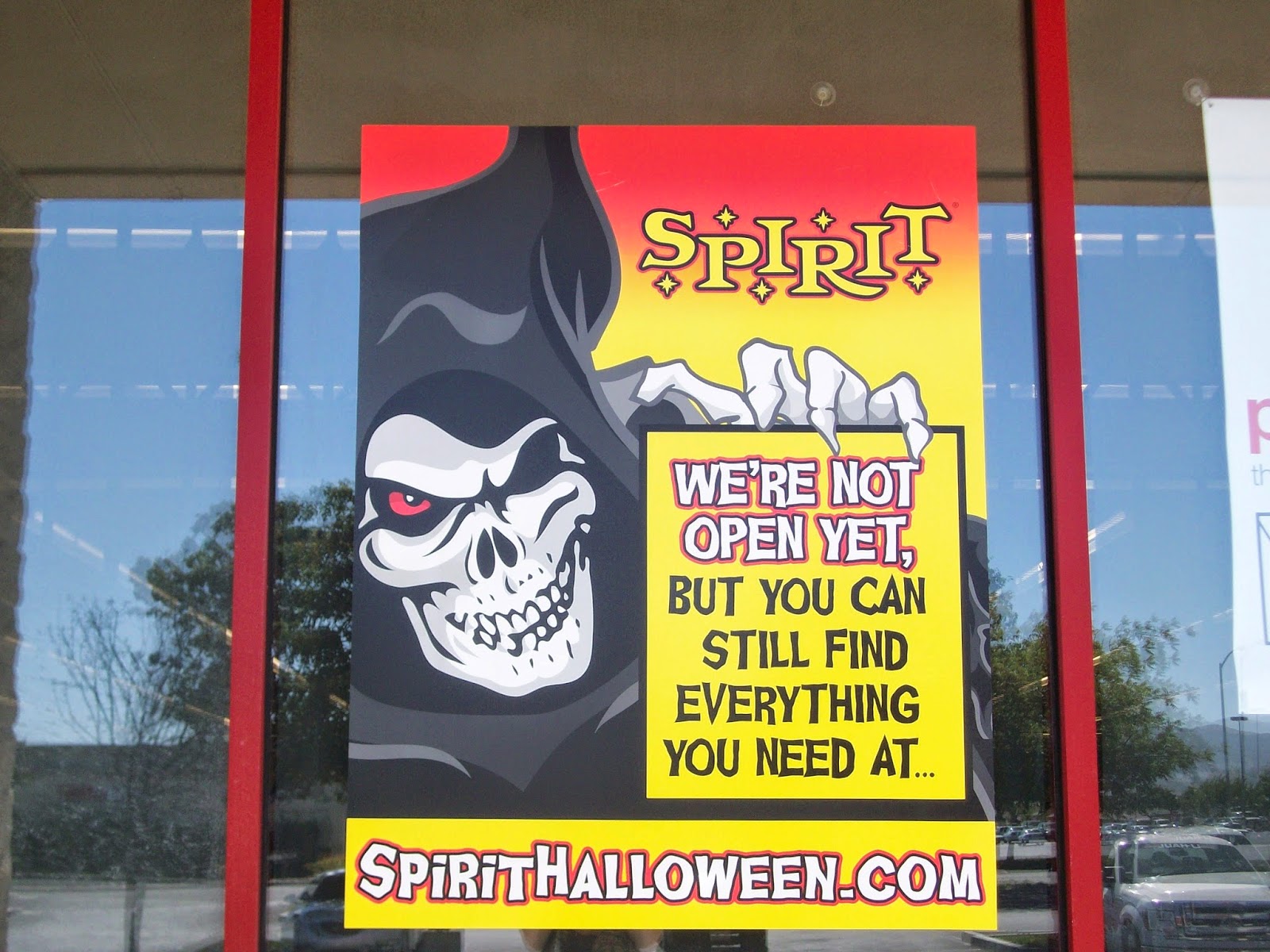 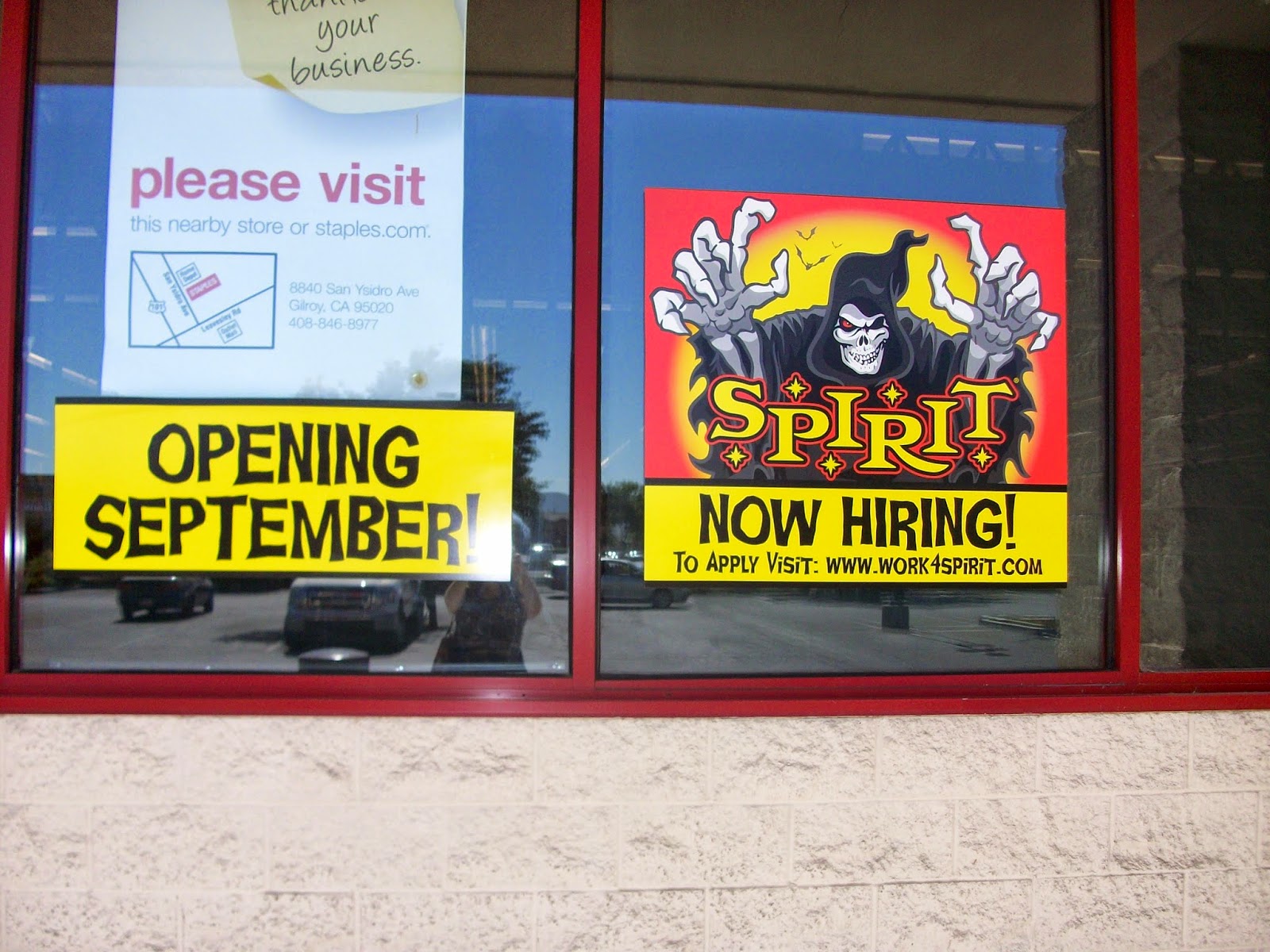 It may only be temporary, but this will give this building some use for a while, until something permanent can be found.  Any amount of use is better than none at all.  And it will be good for our town to have this store. I love going to these stores and in the past when I worked in the next town over, I'd always be going to the store in that town since I was already there.  I no longer work in Gilroy as of June 2013, so last year I trekked over to yet another nearby town, Salinas, to see their Spirit store. I'm so glad I won't have to do that this year!  It'll be right in my hometown.  I've been so excited since hearing that we would be getting this store and will be going as early as possible when it opens in September.   This will be great.  I hope to find a great costume here.  I have no idea yet what to be and have only done some browsing for ideas. But there is still time.

As I said, my town hasn't had one of these stores since 1999.  Spirit will have some competition in this small town, however.   But  I know the selection will be better here than at Target, which only gets a small number of costumes.  I've bough costumes at Kmart in the past. They get a lot more than Target does. Every week, the prices on costumes at Kmart get reduced as the witching hour approaches.  Last year, they had several prisoner costumes for sale that no one seemed to be buying. Rite Aid has very few costumes for sale, most of which aren't very good.  Walgreens came to our town last year, but did not open until mid-November, so this year will be their first Halloween sale.  Don't yet know what they will have.  I expect to see all this merchandise arriving during Labor Day week.

Can't wait to see the store open and will be blogging about it more when it does.
Posted by Jamie Ghione at 7:17 PM No comments:
Email ThisBlogThis!Share to TwitterShare to FacebookShare to Pinterest
Newer Posts Older Posts Home
Subscribe to: Posts (Atom)