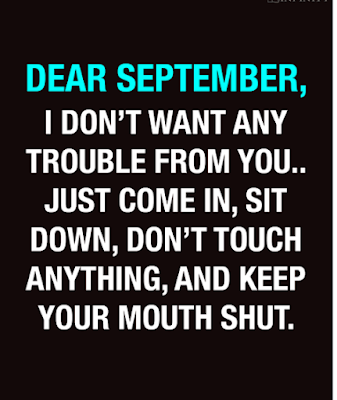 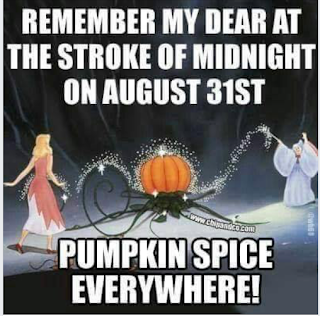 Already that time. Halloween stuff is already in some stores. I have yet to see Goodwill's clothing rack of scouting uniforms, sequined dresses, medical scrubs and other stuff they believe can be transformed into a costume, but I know it will be there soon. They've already got the display racks with angel wings, clown hats and such.

This year's holidays just look to be repeats of last season's. ...

Posted by Jamie Ghione at 8:20 AM 4 comments:
Email ThisBlogThis!Share to TwitterShare to FacebookShare to Pinterest

This is the title of the Holderness Family's latest parody video and is it ever true! But there are some things I'm sure there is no "maybe" about for me.

Though there are some things I'm pretty sure I will be avoiding. The Northern California Renaissance Faire and the San Benito County fair will both be back this year. I've only been to the Ren Faire once and have not been to the County Fair for years so neither of these will be a go for me.
And now I'm seeing Halloween stuff at Goodwill and am wondering about what this holiday will be like this year. Though it already appears to be a repeat of last year.  Same for Thanksgiving and Christmas. And I don't even want to start thinking about New Year's 2022 just yet!
But if staying home is needed again this holiday season, then it's the right thing to do--no "maybe" about it.
Posted by Jamie Ghione at 4:39 AM 3 comments:
Email ThisBlogThis!Share to TwitterShare to FacebookShare to Pinterest

It's time for Readers Imbibing Peril (R.I.P.) 16. As with last year, the annual reading event doesn't have a blog home this year and is on Twitter and Instagram. As always, I will get as many books as possible between September 1 and October 31. 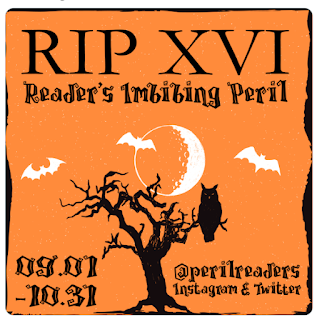 Challenge completed on October 25
Posted by Jamie Ghione at 8:32 AM 1 comment:
Email ThisBlogThis!Share to TwitterShare to FacebookShare to Pinterest

Since these are second-generation, this year's sunflowers are not as big as last year's. I'd put several seeds in one pot, and some in other pots. There was one pot of seeds that did not work at all. Some of those in there pots that opened but the flowers quickly dried up. 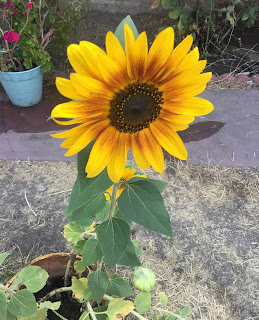 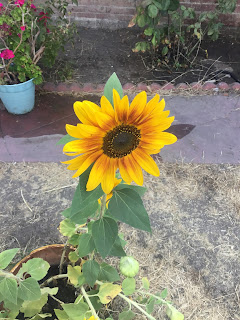 I have been wondering about the one seen above. Notice the brown shades on the petals. Is there any particular name for a sunflower like this? 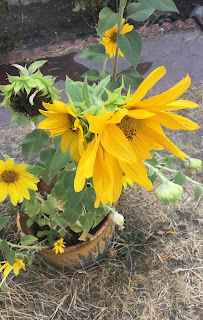 Because so many seeds were put into this one pot, some caused two flowers on one stem. This is what happened on the one in the front of this photo. A larger flower with a smaller on on the side, Has anyone ever seen something like this? 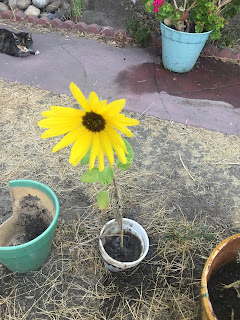 Several of the flowers looked like the one seen above, which looks more like a daisy.
The broken pot on the left was the one that contained the seeds that failed to germinate.
Posted by Jamie Ghione at 6:45 AM 3 comments:
Email ThisBlogThis!Share to TwitterShare to FacebookShare to Pinterest

Once again, I am glad I do not have to worry about kids returning to school and possibly having to go on Zoom again. I could not get into Zoom for my writers lab and still don't know what is happening with the group. Just the same, I liked these recent videos from the Holderness Family.

I was in school in the 1980s and cannot remember ever being given a school supplies list. I just remember getting a binder, paper, pens, pencils and erasers, along with other stuff that might be necessary for some classes, such as a calculator. I cannot fathom having to go through such a long list as those presented in the videos. Also, Dollar Tree was not around when I was in school, and there was no Target or Kmart in my town at the time either. My stuff came from either Rite Aid (then known as Payless) or from the local grocery store. And I was always sent a letter in the mail with my teacher and room Information before school began.
And on a side note, I like to look at the back-to-school sales for things like pens and notebooks, things I can use at home. Especially after they have been reduced to under a dollar at Target. I just got some binders at Dollar Tree for use at home.
I still am uncertain on how to do math equations with multiple operations in parentheses, and now wonder how I ever did them in school. I could not even guess if put on the spot. Word problems in math were a nightmare for me. And some of the other questions slipped my mind as well. Most likely since I have not had to deal with stuff like this since I was in school myself.
Anther thing I cannot remember being so complicated back in my day. I only seem to remember having to fill out a card with basic contact information. Having to go through a scenario depicted in this video would have given me lots of anxiety. Things were so much easier in my day.
I also note how she mentions the Trapper Keeper in the first video. That's one thing I always had each year until junior high school. And they are still being made.
Just more things that have changed a lot over the years by getting more complicated.
Posted by Jamie Ghione at 8:50 AM 2 comments:
Email ThisBlogThis!Share to TwitterShare to FacebookShare to Pinterest

This runs from September 1 to November 30. There are some new categories this year. 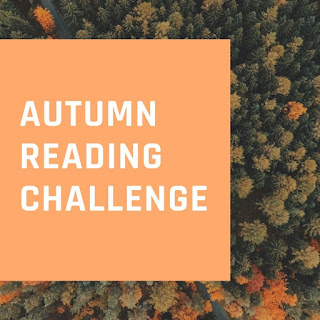 Challenge completed on October 17
Posted by Jamie Ghione at 7:57 AM 2 comments:
Email ThisBlogThis!Share to TwitterShare to FacebookShare to Pinterest

The only such date to occur in 2021.  Though this past year and again this year, Friday the 13th seems overshadowed by the coronavirus. Not many people seemed to acknowledge that it was Friday the 13th two days after the pandemic was declared on March 11, 2020.

I remember being at the store on Friday the 13th in 2020. That it was the superstitious date just barely entered my mind right then, when people were passing through the nearly empty store. I didn't speak up, though.

The next Friday the 13th in the already spooky year of 2020 was in November, just 10 days after Election Day, which lasted nearly a week.

I cannot recall ever having anything bad happen on this date. Not expecting anything today.

Posted by Jamie Ghione at 8:04 AM 3 comments:
Email ThisBlogThis!Share to TwitterShare to FacebookShare to Pinterest

Even though I do not have to worry about kids going back to school, I still feel for those who do. On a Facebook group for my hometown, parents have been posting bout this. I only wonder how I would be handling this if I had to deal with this myself. Just the same, I liked this new video from the Holderness Family:

I agree with the line about Groundhog Day. Everyday in general for the last year-and-a-half has felt that way, even though more places have opened up.

And I'm still wondering of the kids will be walking to and from school staying at their phones, and how many will be out there--how many I will have to watch out for while driving. The high schoolers are set to go back tomorrow, and those in elementary and middle school next Monday. Some of the parents on the aforementioned Facebook group are saying they will be keeping their kids home. I can't help being curious as to how all this is going to work. I still wonder what would I be doing?

Is what is being said in this cartoon true? Is how kids dress more important than their health, particularly at a time like this?  Even I as neither a parent nor an educator find this weird. 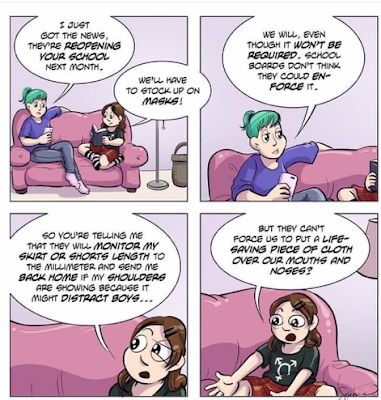 The mental health center is now open on Fridays, but as of yet, the peer mentors (of which I am one) are not working that day. The mask mandate is now back at the center, but I never took mine off to begin with, though I did sometimes tuck it under my nose or chin. And I have still been wearing one to stores and other public places.

As I said earlier, this holiday season already appears to be a repeat of last year's. Though some stuff for Halloween is already at the Dollar Tree. I still don't know what I'll be doing then.

Posted by Jamie Ghione at 8:45 PM 3 comments:
Email ThisBlogThis!Share to TwitterShare to FacebookShare to Pinterest 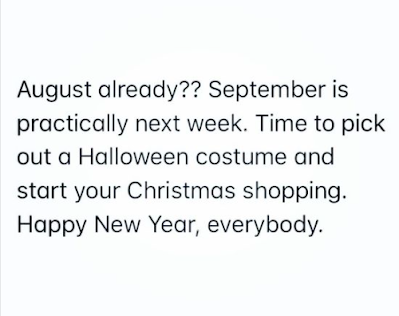 Is it really that time? Fall items are starting to show up at Dollar Tree, eclipsing the back-to-school stuff. And an endcap of Halloween items is at Goodwill. In about a month, one can expect to see the costumes rack at GW, with medical scrubs, scouting uniforms, odd striped dresses, and other things the workers think can become a costume, mixed in with incomplete used store-bought costumes. And the last few days I have been exploring sites that sell costumes, though this year looks to be a repeat of last year. It seems like the bar celebrations will be out again this year. And I don't know about costumes this year. And I won't get started on Thanksgiving and Christmas just yet, though these have not been big holidays for me in the last few years. And same for New Year's Day.

Next week I have to start watching out for the "smartphone zombies" waking to and from school. It has been so weird not seeing them for over a year now.

Posted by Jamie Ghione at 8:16 PM 3 comments:
Email ThisBlogThis!Share to TwitterShare to FacebookShare to Pinterest

Here is the card for August. 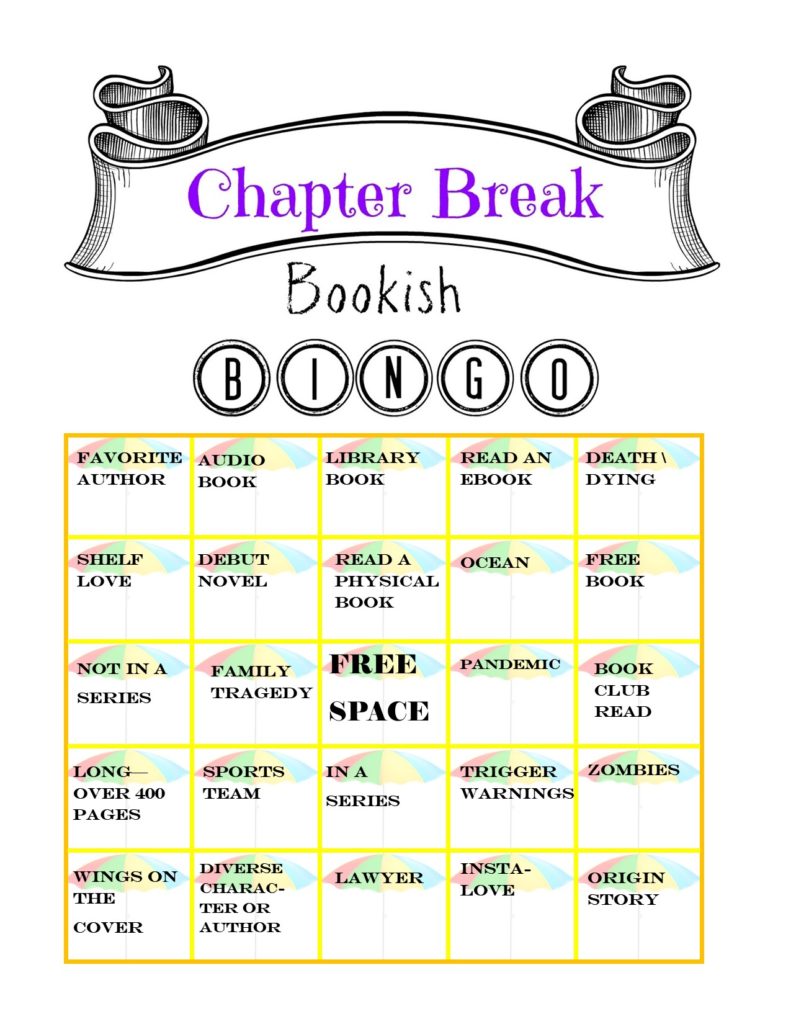