One Day and Counting..

...till we ring in 2009. Wow, where has the time gone? The first decade of the new millenium is almost over. Of course, many will debate that the current decade, century and millenium began in 2001, not in 2000, since there was no year 0. But whether current decade ends in 2009 or 2010, the decade *is* nearing the end. But does 2000 seem that long ago to you? A lot of the years in this decade I can remember as if they were yesterday.

And what can we look forward to in 2009? Not an easy question to answer, as it will be different for each of us. But here's to another good year fo all of us...
Posted by Jamie Ghione at 6:34 PM No comments:
Email ThisBlogThis!Share to TwitterShare to FacebookShare to Pinterest

Which of the Seven Deadly Sins do you commit most?

The sin I commit the most is that of Envy. Yes, I want what others have. How do I envy thee? I cannot even begin to count the ways....

Everyone I know from school as children and/or pets. I have neither and am especially envious of those with kids. Everytime I see someone getting married, I envy the romantic wedding they are having, not to mention the wedding shower they have before hand and the baby shower to follow. I always want to be the one who is the guest of honor at such an event. Even better if I were the guest of honor, I'd have some pictures to put up on my Facebook page. Everyone I know on FB has put up photo albums, with their kids, pets and events as the subjects of the albums. Which brings me to another source of my envy...

Parties. Rarely, if ever, do I get to go to anyone's party. I did get to go a party for Halloween in 2005, but that was well before Facebook and at the time I did not post pictures on the web. Parties are the other main subject of people's Facebook photo albums. I never get to have parties, because well, it's complicated. For one thing, I'm always afraid no one would come. I tried to get some people from college to come to my 21st birthday in 1992, but no one would come. Another problem is where to have it. My home is not an option: I live in a single-wide mobile home, too small even for five people to come over. Barely enough room for everyone to either sit or stand, and only three rooms besides the bedroom and bathroom. Outside is just as crowded, if not worse. I have loose boards in front of my storage shed which I have not been able to get fixed (long story). I don't want anyone to trip on them. Also there is no lighting on the back porch or the lawn, both of which are also quite small. We have a clubhouse at our mobile home park, but we have to put down a deposit of $500, plus $200 for use and cleanup in order to use the house. And we're not allowed to use the clubhouse past 10PM--I know no one will want to have to leave that early. To have a party at a restaurant or community center would also cost a lot and some of these also have the 10PM restriction. It also requires liabilty insurance. Anyone know what that is? I know I don't have it and likely cannot afford it. Because of this, I did not--and likely never will-- have the party I've wanted to have.

It sounds like such a good idea. And now I'll never get to to do it! Esepcially for my birthday! It's in January--such a bad time for abirthday, so soon after Christmas.

And it would be such a good set of photos for my Facebook page...
Posted by Jamie Ghione at 2:53 PM No comments:
Email ThisBlogThis!Share to TwitterShare to FacebookShare to Pinterest

In less than two months the transition to digital TV begins. No doubt you've been hearing about this for the last year. Are you ready? I am--sort of. I have the box already. Yes, I don't have cable or satellite service. I got the converter box in June, but haven't hooked it up yet. I only got ti then because I knew I needed to apply for a $40 off coupon. Upon hearing about this in February this year I immediately signed up for the coupon online. I was trying to get a jump on getting one, not knowing at that time that the coupon would expire 90 days after receipt. I did not receive mine until the last week of April. I then noticed that it expired on July 10. So I knew I ahd to use it immediately. Since each household is limited to only two coupons, I could not afford to waste this just because it was so early. This is different from the paper coupons you use at grocery or drug stores; I just could not afford not to use it, as it was too good not get $40 off the box, and I needed the box. I eventually got the box in June at Best Buy. Now I just need to hook it up, and will do so before February 17, 2009. I saw no reason to hook it up immediately, since that was not necessary. But at least I'm ready to begin.

How about you? Are you ready?
Posted by Jamie Ghione at 2:35 PM No comments:
Email ThisBlogThis!Share to TwitterShare to FacebookShare to Pinterest

..until Christmas Day. The store I work at is just beginnig to give 25% off all Christmas merchandise and we have just begun receiving merchandise for Valentines Day. And we still have New Year's Day to celebrate, two weeks from today! And then the Christmas merchandise will be 50% and then 75% off. Having worked in retail for the past seven years, I'm used to seeing season merchandise coming in two to three months in advance. I believe our Halloween merchandise this year started coming in as early as June. St. Patricks' Day merchandise shouldn't be too far behind, I expect to see that arriving. soon FYI, Easter 2009 is on April 12, so I wonder when that seasonal merchandise will start coming in.

But gettin back to the subject heading, yes, it is seven days and counting till Christmas 2008. And two weeks till the year switches to 2009.
Posted by Jamie Ghione at 5:27 PM No comments:
Email ThisBlogThis!Share to TwitterShare to FacebookShare to Pinterest 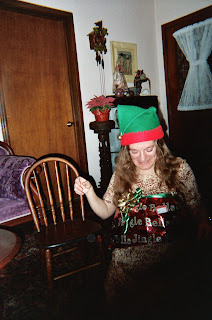 It's almost Christmas--er, it's the "holiday season." We all know that's it's considered offensive to say "Merry Christmas" these days. At my work, we're supposed to start our phone greeting with "happy Holidays.." But I forgot to do that today. But not to worry, I didn't say "Merry Christmas" either. Just greeted the callers in the usual manner. KSBW (the NBC station in Salinas, California) just had its annual "Share Your Holiday" drive. I believe it was originally called "Share Your Christmas" but it had to conform to the neutral "holiday." One of my mobile home park neighbors painted "Happy Holiday" [sic] on one of their windows, and "Feliz Navidad" on the adjacent window. Doesn't that mean "Merry Christmas" in Spanish? How does one say "happy Holidays" in Spanish?

Merry, happy holidays to everyone...
Posted by Jamie Ghione at 6:12 PM 1 comment:
Email ThisBlogThis!Share to TwitterShare to FacebookShare to Pinterest

Hello out there. I've never created a blogspot until now, despite many years of Internet use. I just recently got into the Facebook thing. I've seen this blogspot page before, stumbling onto to blogs found in Google searches. I feel I've come a little late onto the blog thing. I've been an active newgroups poster since about 1999, via Google Groups. You can find me most of the time at alt.music.yes. Now I've decided to try this blog thing. I guess it's time now. Now if I can only get onto MySpace (I can never get those texts you have to type in order to complete signing up!).

What will I be blogging about? My blog title is "Whatever I Think Of!" meaning any random thought or issue of the day that I feel like commenting on.
Posted by Jamie Ghione at 6:31 PM No comments:
Email ThisBlogThis!Share to TwitterShare to FacebookShare to Pinterest
Newer Posts Home
Subscribe to: Posts (Atom)