Well, it has in my area, even though the calendar said the first day was March 20. Those in my area of California did not see spring any weather at all last week. Rain was in the forecast for most of the week and those forecasts proved to be true. It certainly did not feel like spring at all.
But as this week began, the weather began to gradually get warm each day. Today's weather was in the 70s and such weather is predicted for the next few days. Today was able to go without my jacket as I made a run to Kmart, and when I returned home I put on shorts for the first time this year. I pulled my fans out of the bedroom closet today.
Let's see how much longer this lasts! Time to do laundry this weekend, something I dread doing during rainy weather.
Well, at least it's beginning to feel like spring now.
Posted by Jamie Ghione at 4:47 PM No comments:
Email ThisBlogThis!Share to TwitterShare to FacebookShare to Pinterest

No, not really.
You Are a Risk Taker

You are driven toward success, and you don't mind if that means taking a few gambles along the way.
You value your time, and you treat it like it's precious. You like to stay busy.
You are innovative and good at getting results. You are the first to jump in and try something new.
You provide direction and leadership for others. You always have a piece of advice or wisdom to share.
The Nail Polish Test
Blogthings: Discover the Parts of Your Personality that Have Been Hiding
Posted by Jamie Ghione at 12:16 PM No comments:
Email ThisBlogThis!Share to TwitterShare to FacebookShare to Pinterest


I saw in a newspaper earlier this week that Jon Bon Jovi blamed Steve Jobs for killing the music industry. Here is the quote from the rock star from the article in the Huffington Post:

"Kids today have missed the whole experience of putting the headphones on, turning it up to 10, holding the jacket, closing their eyes and getting lost in an album; and the beauty of taking your allowance money and making a decision based on the jacket, not knowing what the record sounded like, and looking at a couple of still pictures and imagining it," he said (via MSN), thinking back to his record buying days. Then came the less fanciful: the blame.

"God, it was a magical, magical time. I hate to sound like an old man now, but I am, and you mark my words, in a generation from now people are going to say: 'What happened?' Steve Jobs is personally responsible for killing the music business."

Yeah, as someone who grew up in the 1980s, I can say how true this is and how I miss that idea as a grownup now. I must confess I have never downloaded music or used an iPod. Why, you ask? Because I never had much luck with the old cassette-playing Walkman. I had one or two different ones that quickly died out on me and have feared the same thing happening with an iPod. An iPod, after all, looks like nothing more than a "tapeless Walkman," as I once called it.

In the 80s, I was primarily a cassette listener, not much for vinyl LPs. I begged for a CD player in 1991 and got one that year for Christmas. I still have and use it today, though it's been about 9 years since I've bought any CDs. A lot of the ones I bought starting the year I got my player are still with me. And I never bothered bothered buying the CD-playing version of the Walkman, out of the same fear of one of those dying out the same way the cassette versions I'd had had died on me.

Another I must confess is that I would often fast-forward my tapes or CDs to songs I liked or those that were popular and that helped sell the album. The old 45 RPM records of course, were made for selling just the one song and its b-side. This idea was later applied to cassettes and CDs as the cassette singles and CD singles, but these formats never seemed to catch on.

Just before I got my CD player in 1991, I saw an article on Rolling Stone on how CD booklets were killing the classic album covers, reducing them down to booklet-size. Yes, the Beatles' name was no longer in embossed letters on "The White Album," and the zipper on the Rolling Stones' "Sticky Fingers" album cover could not be reproduced for the CD, but at least we got a picture jacket, something that downloaded music has killed. One of the first CDs I bought in 1991-92, was Elton John's "Goodbye Yellow Brick Road," which I had gotten on cassette in 1986. My cassette mysteriously disappeared sometime later, so I knew I needed to get this one on CD. Sometime before getting my CD player, though, I'd 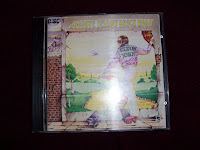 bought a used copy of the vinyl LP. So I've had this one in all major formats.

And even those who do buy CDs today have missed out on the old record stores. Today it's all about buying them on the Internet or at Target or Walmart (which was also the option back in the day if no record stores existed in your town). None were in mine. If you could get to a record store, you could see posters on the walls and someone working at the store might have taken time to share their love or knowledge of a particular artist or genre. You didn't get that if Kmart was your only record-buying option, unfortunately, but if that's what you had to do get the album you wanted, you'd do it just to have the album in your possession. I managed to get out of town many times to get to the Wherehouse and other major music-store chains that once existed, but most of the time had to settle for the Kmart or Target in my hometown, where I get most of my DVDs today.

From another link on this subject:

Today’s teens are missing out on a lot. There’s nothing like the good old days, listening to a blastingradio with all your friends, singing songs at the top of your lungs, and adults clicking their tongues thinking that the music was just noise. Good times.

Maybe Jon has a point. The music industry is not what it used to be. Is the love that teens had for music 30 years ago gone? Have we allowed ourselves to be manipulated by technology so much that the pure joy of listening to ten songs from your favorite group at once is gone forever?

Well, maybe you can find a used one somewhere, along with used vinyl records. They're out there somewhere. Check your Goodwill.

Movie Review: Made in Dagenham

I don't do too many movie reviews and am not that great at being a critic. However, I felt it's worth noting a few things about a movie I just saw, "Made in Dagenham." My town's theater showed it as part of the their Cinema Art series on Wednesdays two weeks ago. I'd heard a few things about the film in advance and thought it might be interesting to see. Once I learned it was coming to my town, I just had to make an effort to see it.
The film is a dramatization of the Ford sewing machinists strike in 1968, a piece of history that some people may not have learned about. The strike occurred at the Ford Dagenham assembly plant. The female workers went out on strike against sexual discrimination and desire for equal pay. This ultimately led to the Equal Pay Act of 1970.
I was not aware of all of this history, but nevertheless found the film interesting and can say it's a must-see. Be sure to check it out on DVD.
Posted by Jamie Ghione at 4:29 PM No comments:
Email ThisBlogThis!Share to TwitterShare to FacebookShare to Pinterest 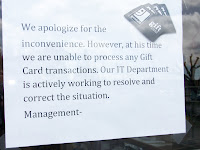 I regularly read the blogs Unnecesaary Quotes , LowerCaseL, and Apostrophe Abuse, all of which are composed of pictures of handwritten signs submitted by readers. I only wonder why there isn't a blog (as far as I know) that collects pictures of typos.
I spotted this sign at the Goodwill store in Hollister, California (where I live). Notice the line that says "However at his time, we are unable to process any gift card transactions." Obviously they mean "...at this time..." but accidentally left off the first letter in "this." Even though I knew it was a mistake I could not help jokingly thinking to myself, "at whose time?" LOL.

Posted by Jamie Ghione at 4:18 PM No comments:
Email ThisBlogThis!Share to TwitterShare to FacebookShare to Pinterest

I've been absent for a while, and have been lacking stuff to write about.  I didn't do a lot last month and this is only my fist post for this month. But stay tuned I will come up with something. I just saw a very informative historical movie, and read a very touching book and spotted a very funny sign.  I plan to try to get each of these posted soon.
Posted by Jamie Ghione at 2:22 PM No comments:
Email ThisBlogThis!Share to TwitterShare to FacebookShare to Pinterest
Newer Posts Older Posts Home
Subscribe to: Posts (Atom)