Just happened to find some of these in the coupon insert that comes in the Sunday papers.  Kind of a coincidence after I attempted to honor the late Billy Mays by buying a jar of Oxi Clean earlier this month.  The new coupons don't expire until October 31, but I have a feeling  I won't run out of my current jar before then.   No Kaboom coupons, unfortunately--I still could use some of that.
Posted by Jamie Ghione at 12:03 PM No comments:
Email ThisBlogThis!Share to TwitterShare to FacebookShare to Pinterest

In the grocery store, not on TV 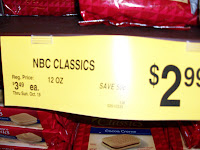 Ever see the shelf tags Safeway uses on Nabisco brand snacks, abbreviating the cookie and cracker company name (which is itself an abbreviation of  National Biscuit Company) as NBC which has always seemed funny to me.  I would often find  it funny to see something like "NBC Crackers" on the shelf tags.  I especially thought this one that I spotted the other day was funny:  NBC Classics.  All the classic Nabisco cookies (including the animal cookies in pink and white frosting).  Yet NBC Classics sounds like something that would be on the NBC network or a  DVD collection of such programming  and not like something in a grocery store.   And certainly not something that  would only be $2.99.
Strangely enough National Biscuit Company did once abbreviate itself N.B.C.
Posted by Jamie Ghione at 11:31 AM No comments:
Email ThisBlogThis!Share to TwitterShare to FacebookShare to Pinterest

They said not till the end of July and then not till then end of August, but the Halloween items are in the store as of this past Monday.  Among the items we got today and that we get every year are the  Anna Lee mice. Anyone familiar with those?  They make these for every holiday.

This is one example of the Halloween Mice from last year.
Posted by Jamie Ghione at 3:55 PM No comments:
Email ThisBlogThis!Share to TwitterShare to FacebookShare to Pinterest 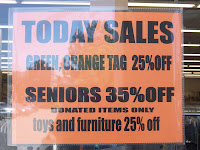 Having been following the blogs Apostrophe Abuse, Lower Case L, The Blog of Unnecessary Quotes, and Horrible License Plates,  I've begun to easily spot signs that carry these orthographic problems and vanity license plates with strange arrangements of letters and/or numbers on plates and photographing them to send to the appropriate blog.
The most common misuse of the apostrophe that has been illustrated is using it to form a plural.  And there have been cases of leaving out an  apostrophe when forming a possessive, and the confusion of "you're" and "your." Today however, I saw something different: failure to indicate a possessive as evidenced in the photo.  Obviously they mean "Today's Sales."  The sign was from a Goodwill Store in Gilroy, California.
Curious, does anyone have a blog that collects errors on signs like this one?  If so, I'll gladly send you a copy of the photo here and will gladly be one of your followers.
Posted by Jamie Ghione at 5:09 PM No comments:
Email ThisBlogThis!Share to TwitterShare to FacebookShare to Pinterest 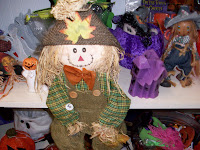 Still more than three months till the scariest night of the year, but you can expect items starting to come in within this month and the next month or two, including where I work. We have yet to receive halloween items, but I expect to see them sometime this month. However, last week on the last day of June I saw Halloween items already displayed at a local thrift store run by the town's hospital. The items for sale were much like those I get in my store, nothing like what this blogger wrote last October:

The Halloween selection at thrift stores is always a little depressing. There’s the beatup and never used vampire makeup kit still clinging to the backing card. There’s the 342 baby costumes of Winnie the Pooh and a bunny rabbit. There’s 14 VHS copies of the Olsen twins’ Double Double Toil and Trouble. There is the odd Minnesota State Fair cloth cowboy hat that was thrown in with the Halloween crap. And then there’s the school-age kids who are either poor or just have bad parents, dispiritedly trying to find some sort of passable costume that will fit.

Interesting scenarios. I'm now compelled to look at the Halloween selection at the thrift stores later this year, as the holiday nears. What I saw last week doesn't even come close to what the quote above says. Nothing mentioned above or anything close to it was at the store. However, when the items start pouring into thrift stores, I almost half expect to see similar, if not identical, scenarios. From past years, I recall seeing used store-bought costumes with pieces missing, e.g., children's Superman costumes missing the cape or Ninja costumes missing the plastic sword. And I've seen graduation robes thrown in among the used costumes. These actually could make good costumes, e.g., the black robes could be easily used for a witch, the red ones for devils, white ones for angels, and perhaps a Renaissance dress from a navy blue or emerald green robe? I actually used this idea one year, making the half-devil/half angel from halves of a white and a red robe.

More on this in a few months...
Posted by Jamie Ghione at 5:29 PM No comments:
Email ThisBlogThis!Share to TwitterShare to FacebookShare to Pinterest

Honoring a recently deceased celebrity by buying his products 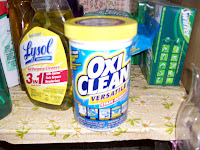 No, I'm not talking about Michael Jackson, and I didn't buy one of his CDs or DVDs. I'm talking about Billy Mays, the Oxi Clean guy, and how I got a jar of Oxi Clean at Walmart this afternoon. I had a coupon for the stuff. The Oxi Clean purchased today is pictured at left in my cleaning supplies closet. It's been a long time since I bought and used Oxi Clean,Orange Glo or Kaboom products, a fact that occurred to mean as soon as I learned learned he'd died a week ago yesterday, only three days after Jackson (the two were the same age, both 50). When checking my Twitter page that day, I saw that Oxi Clean was one of the hot topics that day, and I wondered how that could be. That's when I heard.

I just recently found this link from Costumezee.com . It's still months before Halloween, but I'm now beginning to wonder how many people I will see in the guise of the late pop star. Farrah Fawcett, on the other hand, probably won't be as popular, at least among the younger folks who don't know much about her. I showed the above link to the discussion community on Buy Costumes, suggesting the Oxi Clean guy as a possible Halloween guise this year. One person she she could not imagine anyone going as the Oxi Clean guy. I believe however, that if anyone chose to be Billy Mays, they certainly would be outnumbered by those in disguise as Michael Jackson. I then discovered this link. And this--from before he died! However notice this discussion:

Perhaps the same argument can be made about Michael Jackson, who will no doubt be more popular that either Farrah Fawcett or Billy Mays.

Anyway, back to Oxi Clean. It's about time I started using it again when I next do my laundry. Why I haven't used it in year, I have no clue. And I need to clean out the ring about my toilet bowl, perhaps a purchase of this Kaboom product is in order soon. I've tried this stuff once before and it worked well. Why I haven't used it regularly I don't know, but I'm thinking I should. Nothing else I've tried recently to get rid of the toilet bowl ring seems to be working.
Posted by Jamie Ghione at 4:18 PM No comments:
Email ThisBlogThis!Share to TwitterShare to FacebookShare to Pinterest
Newer Posts Older Posts Home
Subscribe to: Posts (Atom)