Are you using Pinterest? A lot of people are, and that includes myself.   I signed up after seeing several Facebook friends were using Pinterest.  At first I was reluctant, but decided to sign up, but had to wait at first.  Then I finally was accepted, and was slow to begin pinning.  Now I have a total of nine boards so far, and have been pinning and repinning.  Today alone I created one new board to which I made 11 pins as of yet.  And I'm still pinning to ones I previously created.  And a lot of my pins have been repinned by others.  I only wonder how long this idea will last.  We'll see over time.

I have found numerous dessert recipes this way.  So many I don't know if I will have time to try them.  I used to like to try baking, but haven't really been in that mode much recently.  Same with crafts, and I do want to find time to make some stuff to try selling on  Etsy.  I just have to find time and energy for these kinds of things.   Reading, on the other hand, I have been dong a lot of lately and tow of my Pinterest boards are on books, those I fell are worth reading and some I want to read eventually.  And I began revisiting my childhood when I saw a friend posting a toy I once had.


Posted by Jamie Ghione at 6:31 PM No comments:
Email ThisBlogThis!Share to TwitterShare to FacebookShare to Pinterest

Oh, Spring, Where Art Thou?

Spring began 11 days ago, but it has only somewhat felt like spring.  Off and on since March 20, there has been some sun and some rain.  Some days on which it was warm enough to go without a jacket, and without turning on the heater.  And some days when it was a little cold.  Rain struck two weeks ago today and again today, with the drops falling down intermittently throughout the day.  Winter this year hardly felt like winter  and now we seem to be getting a late patch of winter.  It's almost as if the seasons are being reversed. Right now sun is showing outside, despite raining falling down off and on throughout today.   I'd gotten invited to a barbecue today for a local political candidate and was worried it would be rained out.  I went anyway, and it was on, as it was being held inside a large garage at someone's residence.  However, the turnout wasn't so big, presumably because of the rain.  But it was still great to get out for a while today despite the weather.

I'm sure we will get out spring soon.
Posted by Jamie Ghione at 6:15 PM No comments:
Email ThisBlogThis!Share to TwitterShare to FacebookShare to Pinterest

One More Day Till "The Hunger Games" Movie 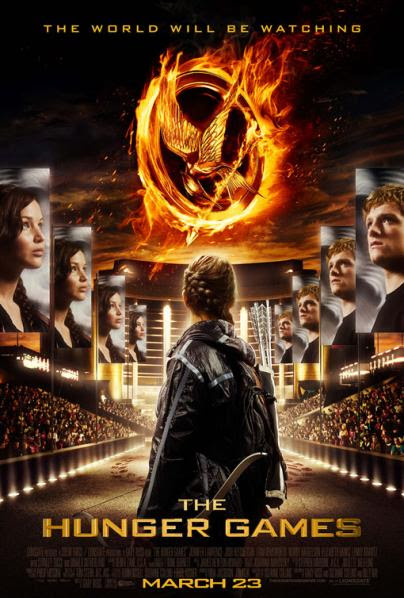 It seems to be the most anticipated film of the year so far and now it's only one day until its release.  Like a lot of people,  I've been excited about seeing "The Hunger Games" after having read all three books last month.  Our town's theater is having a special midnight showing tonight, but I never go to these things, what with work early in the morning.  Even if I could, it probably would sell out quickly and be a huge crowd, something I was always try to avoid.  For that reason, my family and I will not likely be going on Saturday or Sunday, since it's likely to be crowded then, with teenagers flocking to see the film.   Even though the books were aimed at  teens, they have been popular with people of all ages.   Once I'd heard about the film, I wanted to read the books, which I had seen on the shelves at the local Target.  I got them for Christmas and read them all last month.

All week long, there have been interviews with the stars of the film on TV and in newspapers.  Yesterday at the cinema in my town, a woman came to pre-order five tickets for one of the weekend showings.   Again, I don't know when my family and I will be going, but likely next week on a weekday.  It's showing on two screens (says the theater's website), which the cinema tends to do with moves like this.  I'm now waiting to see how much money this much-anticipated movie makes in its first weekend.


Posted by Jamie Ghione at 5:00 PM No comments:
Email ThisBlogThis!Share to TwitterShare to FacebookShare to Pinterest

Blogthings: 100's of Fun, Free Quizzes and 3 Stupid Ones

Posted by Jamie Ghione at 11:12 AM No comments:
Email ThisBlogThis!Share to TwitterShare to FacebookShare to Pinterest

Quiz: What Color Cell Phone Are You?


What Color Cell Phone Are You?

Blogthings: If Quizzes Are Outlawed, Only Outlaws Will Take Quizzes

Quiz: What Elementary School Subject Are You?


What Elementary School Subject Are You?

The First Rule of Blogthings Is: You Don't Talk About Blogthings

Waiting for the "Hunger Games" movie

Just watched this trailer for "The Hunger Games" movie (the user did not allow the video to be embedded).  I read the books last month (I'd gotten them for Christmas) and am now waiting for the movie to come out next weekend.  It should be good!  Getting excited!

Several members of my family have also read the books and likely they will be seeing the film as well.
Posted by Jamie Ghione at 5:27 PM No comments:
Email ThisBlogThis!Share to TwitterShare to FacebookShare to Pinterest

Daylight Saving Time has already begun.  I've always had mixed feelings about this.  For someone who has to be up so early for work, getting to bed early when it's still light outside can be frustrating. No one wants to be in bed that early, wouldn't you agree?  And it can be difficult adjusting to the time for at least the first few days.  About the only good thing is the extra daylight which lasts until a week after Halloween. And I wasn't sure what to think back in 2007 when the start date was pushed ahead to the second Sunday in March from the first Sunday in April.  And that the end date would now be the first Sunday in November, pushed up from the last Sunday in October.  Before that, it began on the last Sunday in April.

Remember having to reset the time on your VCR back in the day?  When I went to college in 1995, I got a new TV and VCR to take with me.  The VCR it turned out automatically reset the time when the time change occurred.   One day after the spring time change in April 1996, while I was riding the college  transit bus, I overheard someone say that people have probably forgotten to reset the time on their VCRs. I then told her how mine adjusts the time by itself.  I ended up having the TV and VCR for several years after college, and remember waking up at 1:59AM on April 7, 2002, and seeing the VCR clock move ahead to 3AM.   And I recall coming home from a Halloween party in 2005 and seeing the VCR clock move back as DST ended for that year.   Yes, I still had that thing even after getting my DVD player for Christmas in 2002.  And I still had it (but rarely used it) when the new DST start date began in 2007. I had to turn off the setting that auto-changed the time.

I only now have to reset my watch (I still like those even if others don't!)  and any clocks in the house, as my cell phone clock and computer clock set back automatically.  Same with my digital camera clock.

Unfortunately, I've noticed the clocks on the phones at work are still on the old-start date systems, as they had bee installed in 2005, when the store first opened.  They were an hour behind today, and one a different note, one of the wall clocks was behind in minutes.

And many of you have probably always thought it seems earlier or later whenever the time changes occurs.  I man, does anyone really know what time it is?
Posted by Jamie Ghione at 2:03 PM No comments:
Email ThisBlogThis!Share to TwitterShare to FacebookShare to Pinterest
Newer Posts Older Posts Home
Subscribe to: Posts (Atom)