It's almost time for the annual Countdown to Halloween.   I will be participating again, as I have been since 2009.  It's always fun.  I've just changed the background on my blog to look spooky for the holiday.  It's always fun.  Not sure what I'll be posting, but I'm always looking for and thinking of something.  I try to think ahead about what to post, but it isn't always easy.  Just so I get something.

And tonight I began my annual decorating of my front porch for Halloween, along with decorating my kitchen windows.  I just hate the fact that there is no lighting or working light sockets on my lawn area.  I keep getting the idea to set up a graveyard there, but without lighting no one will see it. Also, since I have neighbors on all sides, including behind me, it's likely no one but those people (whom I have never actually met) will actually notice if I decorated on the lawn.  But that's just the way it is. I do what I can do.  Pictures of my decorations will follow once completed.

Still a few things to do before my decorating is done and will be sure to finish it tomorrow.  I like to have it up for all of October, which begins on Monday, and always start as close to the first as possible.  I knew I would have to do it this weekend if I wanted to have it up by the first.  Unfortunately, this was also the weekend I had to do laundry, so I did that first yesterday.  I had a free movie ticket for our local cinema and wanted to see "Hotel Transylvania" so I used my ticket to see the show at 7:30PM.  I rarely go to night shows since you have to pay full price after 6PM on most nights, but since this was free, I went last night.  It was quite crowded, since it was Friday night and lots of families with kids were there, naturally.  The movie was fun, and funny at times.  Good way to kick off the Halloween season, and I'm waiting to see "Frankenweenie" next weekend.  Sounds like a good one too.

Can't wait to see what others have planned for the countdown.
Posted by Jamie Ghione at 9:11 PM No comments:
Email ThisBlogThis!Share to TwitterShare to FacebookShare to Pinterest

It just doesn't feel like summer is over. The fall equinox is either today or tomorrow, yet the warm weather is still lingering.  But then this is California, and that's how fall weather often is at least for a month or so, maybe longer.

Even if the weather is no reminder that summer is ending, other things are.  The items in the back to school sales that began in July have been discounted to about 86 cents each.  Halloween items have been appearing in stores since August.  My place of work began getting Halloween even earlier that--beginning on the last two days of July.  The temporary Halloween stores popped up before or after Labor Day.  So far I've been to Halloween City more than Spirit.  The Halloween City in Gilroy, CA is near where I work but Spirit is over the bridge from the intersection across the street from work, so walking over to Halloween City has been easier to do.  I found a used poodle skirt at my hometown Goodwill almost tow weeks ago.  I'd begun considering costumes for this year, and had a 50s one in mind among others.  Once I saw this, I just had to get it and am now looking for a striped shirt, some scarves and pink jacket to go with it.  I also need to know what shoes I should wear.  and next weekend my Halloween decorations will be going up.  I always try yo get them up as close to the first to October as possible. This year, the first will be on Monday, so I will likely start next Friday or even Saturday.  Two years on a row, it was 90 degrees during the last days of September and I endured hot weather those two years to decorate the front porch for Halloween. 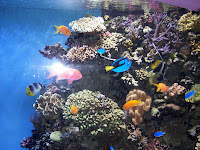 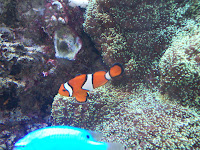 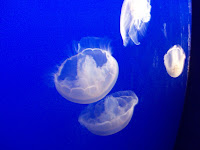 What did I do this summer?  Well not too much unusual or out of the ordinary, but the first week of July I managed to go on my first casino trip, something I'd love to do again sometime.  And two days later, went for the first time to the Monterey Bay Aquarium, in Monterey, CA, about 45 miles from my home town of Hollister.  Here are some photos from the aquarium.
There are a lot of displays at the aquarium and I took a lot of photos that day. It was hard to just choose a few for this post.
Unfortunately I did not get may photos of the casino trip, as I feared we would not be allowed to take photos inside the casino.


Summer may be officially over, but that doesn't mean I'm ready to retire the shorts just yet or go without sunscreen if I'm going to be outdoors for a long time in one day.  The warm weather is still there,  as of now at least.

Posted by Jamie Ghione at 3:10 PM No comments:
Email ThisBlogThis!Share to TwitterShare to FacebookShare to Pinterest 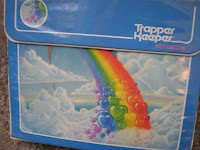