OK, here is this week's assignment for the League. I'm back after a brief hiatus. Here are the details below, copied form the site:

This week’s assignment from the League: Hate is such a strong word, but…


I had another idea lined up for this week’s topic, but Cal at the Canadian Cave of Cool has forced my hand. A while back, Cal suggested this as a topic and went ahead and wrote his article. Well, I’m going to piggy-back on it, because it was too good to pass up! This week’s challenge for the League of Extraordinary Bloggers…

What piece of pop culture did you HATE as a kid?

I had to think long and hard on this one.  Because there are many times I've declared that I've hated something (and yes I know it's such a harsh word), but I wasn't sure at first what to say here.

First let me  say how other bloggers who  have already responded have hated different toys, some which I never really got into.  As someone who liked more girly stuff, GI Joe meant nothing to me.  Even though I had a few baby dolls, I never asked for Baby Alive. I can just see how I would have worn it out trying to make it poop all the time.  I did actually have the Baby Alive coloring book, with its endearing story of a little girl who wants Baby Alive after seeing her in a toy catalog, so she gathers up her allowance money to buy the doll. Her dad builds the doll a high chair, someone sends matching dresses for the girl and the dolls and she takes the doll to dinner at a restaurant and to open-house night at school. The dog likes the doll, waiter at the restaurant compliments her and a classmate likes the doll as well. Yeah, would this have ever happened?  As far as My Little Pony and "Zoobliee Zoo" go, by the time those came around, I was already a teenager and declared myself past the age for such things. But at that same time, I found myself sucked into the Cabbage Patch Kids craze and  even asked for one, getting one for Christmas in 1985, when I was 14. (I still have it).  My mom gave one of these to my then four-year-old cousin that same year.  It was this memory that triggered the focus of my post.

Before my said cousin got her Cabbage Patch Kid for Christmas that year, she had a knockoff called the Flower Kids.  Now this is the focus of my post: Hate (not too strong, however) for Imitators.  They say imitation is the sincerest form of flattery, yet the imitator often is the unsuccessful one.  Does anyone remember the Flower Kids?  They were an example of how a successful product by one manufacturer causes others to try to cash in the success of the original by coming up with their version of the product. Most often the knockoff product doesn't match the success of the original.

A popular toy I had at the age of 10 was Strawberry Shortcake.  I had some of the original dolls, and some playsets.  This  line too had some forgettable ripoffs:
Cherry Merry Muffin
Life Savers Dolls
Sugar and Spice (This was created by Colorforms when Kenner refused to allow the rights to SS)
Lanard's Jelly Bean Dolls
I would have hated to settle for any of these.  Come to think of, I didn't know about most of them at the time, but had I been given any of these, I would have known they weren't the Real McCoys.  I already knew what the real Strawberry Shortcake looked like.

As for others, I'm betting there was some GI Joe knockoff, but don't have the interest to find out.  Barbie was imitated numerous times I bet--remember Darci Cover Girl? And many others tried to imitate old Babs--Tuesday Taylor anyone?  And what else was there? Did My Little Pony have any knockoffs?  None that I could find, which seems weird given how successful the line was.  But enough about toys, as I want to discuss another form of pop culture that doesn't seem immune to knockoffs.

That pop culture medium is television.  There have been a few instances where a successful TV series seems to inspire an imitator or more.  Does anyone remember Charlie & Co. on CBS in 1985-86?  I never saw it , I must admit, but remember hearing about it and how it starred Flip Wilson, Gladys Knight (without the Pips!) and a pre-Urkel  Jaleel White.  It was about an African American family in Chicago.  How did this show come about?  It was something that NBC had debuted just a season earlier. 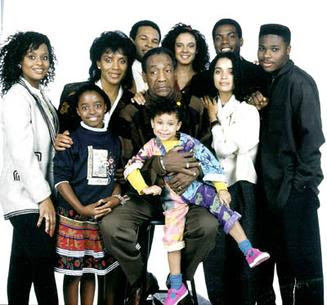 After a disastrous season in 1983-84 (in which none of the new shows that fall made it to another season), NBC found a hit on hits hands a season later with The Cosby Show. Veteran actor and comedian Bill Cosby had his first successful TV show since I Spy ended in the 1960s.  The Cosby Show ran on NBC for eight seasons, unfortunately suffering competition from The Simpsons during Cosby 's final two seasons.  I was one of those who defected from Cosby to The Simpsons between 1990 and 1994, when the still-running Simpsons was on Fox's Thursday night lineup.  Even though I never saw Charlie & Co., it's obvious why it didn't succeed.

I was quite surprised that Cosby's success didn't cause other imitators because of something that happened on NBC a decade after Cosby's premiere.  The Cosby Show ended in 1992 and a year later its spinoff A Different World ended, as did NBC's long-running Cheers, leaving some holes on the network's Thursday night lineup.  Seinfeld remained and was joined the Cheers spinoff Frasier a year later.  In the fall of 1994, however, came a  new show that would be the most successful debut of that season and would have a decade-long run.

That show was called Friends, and it starred six actors, most of whom had been in failed previous TV shows.  It became NBC's Thursday night anchor for the rest of its run, and its stars went to have successful film careers as well.  Like Cosby, Friends's success wasn't immune to imitators, but unlike Cosby, Friends had several knockoff shows that debuted on the five networks in the fall of 1995.  More than likely, no one remember most of these shows, except The Drew Carey Show, which came into its own, eventually no longer seen as a Friends  or Seinfeld knockoff  (like Jerry Seinfeld, Carey played a fictionalized version of himself) and having its own successful run.  But does anyone remember If Not For You?  Partners (with Jon Cryer)?  The Crew?  First Time Out ? (though many saw this one more as a knockoff of Living Single, which debuted on Fox a year before Friends).  Can't Hurry Love?  Notice that most of these show didn't last the entire season and none of them made it to a second season.  I missed most of them (didn't get the channels they were on) but I know they couldn't have been as good as Friends was.  All of them were seen as Friends imitators, which could be why they lacked success.

Bottom line--most imitations will be hated by most and will not succeed and will be forgotten by most.  I'm sure I might have hated some of the toy knockoffs given my age at the time of some of them.  Anyone at any age seems to be able to know the real thing from the fake one.

Not that imitating is a bad thing, but sometimes the result is something that other will hate vs. the original.

Along with the Leaguers linked in the second paragraph, here are the participants this week so far:
Monsterfink
Nerd Rage Against the Machine
Las Vegas Yankee
Thirtyish-Year-Old Boy
Henchgirl
Pop Rewind
Rediscover the 80s
Fortune and Glory Days
Neato Coolville
Diary of a Dorkette
Goodwill Geek
Batcave Toyroom
Posted by Jamie Ghione at 7:21 PM 1 comment:
Email ThisBlogThis!Share to TwitterShare to FacebookShare to Pinterest