Do you remember having to make collect calls, in the days before cell phones? If you grew up in the 1980s and particularly in the 1990s, you may have been familiar with the ubiquitous commercials for 1-800-COLLECT, featuring celebrities. Below is one such commercial, featuring The Simpsons.

Sound familiar now?  I don't remember using this service very often. I only thought about after seeing this refrigerator magnet I got in college.  Our resident advisers gave us a care package when we first moved into our dorm rooms. It included this magnet, which I still have today: 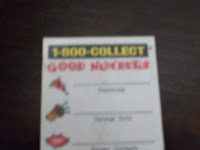 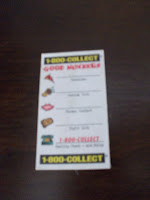 According to this link from 2014, the service was still in business and a customer attempted to use it, resulting in the following:

An Ars reader wrote in this week with his tale of woe. After forgetting his cell phone at home, he traveled from Las Vegas to California and had to place a call back to his home landline. So he located a payphone and found that, so strong were the company's early ads, he still associated the 1-800-COLLECT number with reasonable collect call rates.

He dialed and placed a 6 minute call. When his home phone bill arrived in a couple weeks, it showed a third party charge for $42.55—$33.93 for the call itself, with the balance for "cost recovery fees" and the like. (The charge originated with Network Operator Services, which 1-800-COLLECT uses to bill some of its services.)

The reader was outraged. "There are unscrupulous carriers that charge even more than $42.55 from 1-800-COLLECT, whose website claims it is a 'trusted and recognized brand'?" he wondered. Similar complaints aren't hard to find.

Who knew?  It seems services like this have all but vanished thanks to the advent of cell phones.

I can recall having to use a payphone at school in the 1980s, but I believe that was before these sort of services existed or became common. I would call collect, if I had no (or not enough) money on hand for the phone charges, which increased over time.  I recall it getting to be up to a quarter.  To call collect, I just had to tell the operator who would then ask the person being phoned, "Will you accept the charges?"

Remember all this?
Posted by Jamie Ghione at 11:03 AM No comments:
Email ThisBlogThis!Share to TwitterShare to FacebookShare to Pinterest

Quiz: How Addicted to Blogthings Are You?

Agree somewhat. I find myself taking these quizzes and posting them on my blog when I don't know what else to put on the blog.


How Addicted To Blogthings Are You?
Blogthings: 100's of Fun, Free Quizzes!
Posted by Jamie Ghione at 8:09 PM No comments:
Email ThisBlogThis!Share to TwitterShare to FacebookShare to Pinterest

Sending One's Work to Oneself to Copyright--Is this Effective?

Last Wednesday on her blog, Stephanie Faris wrote about four ways for authors to avoid being sued. Among those were copyrighting one's work by sending a copy of the story to oneself.  After I typed the first draft of my memoir, my mom told me to do this before letting anyone else read it.  I'd saved it as pdf file one Sunday afternoon and was about to email it to the members of my book club through our group email.  "Did you copyright it yet?" Mom asked, meaning did I send myself a copy. I hadn't--not yet--so I saved the email I'd begun in my draft folder and the next day sent myself the first copy I'd printed out. I'd just typed a second draft that I'd saved as a pdf. When I received it back three days later, I resumed sending the email, coincidentally just before our monthly meeting in June. Of the members who showed up, only one said she'd gotten it and the others present each admitted that they had not checked their email that day. I also sent it to to a guy I knew in high school that same day.

Below is the envelope I sent the story to myself in with the story still inside (I was told not to open it). The receipt from the postal place is used to cover up  most of my address. 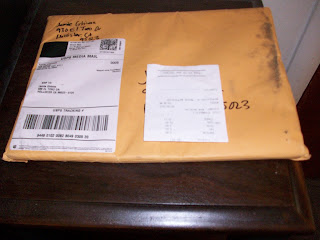 This method is known as the "poor man's copyright," and according to this link, it has proven ineffective.  But even so, my mom said, it still works. Another post quoted in the blog points out that your work is copyrighted once you create it. But I've already mailed my story to myself, so what is done is done.

For the record, I've only received some feedback as of yet from those to whom I emailed the story.  Though I understand it takes different people different amounts of time to read.  Another person I'd sent it to is the bartender at my favorite local bar. I saw her two weeks ago at a neighborhood grocery store, and she said she'd begun to read my manuscript, but that she's a slow reader.  Another I sent it to, a fellow bar patron was texting me about what she had read so far when she received the email.

Posted by Jamie Ghione at 5:04 PM 2 comments:
Email ThisBlogThis!Share to TwitterShare to FacebookShare to Pinterest

Quiz: What is Your Goth Name?

What's Your Goth Name?
Blogthings: 100's of Fun, Free Quizzes!
Posted by Jamie Ghione at 8:31 PM No comments:
Email ThisBlogThis!Share to TwitterShare to FacebookShare to Pinterest

Hope everyone has a happy July 4th, whatever you plan to do today.

In my home town, the July 4th weekend is dominated by the annual motorcycle rally. Our main street is blocked off and most business are closed, and various souvenir booths are set up. People come from all over. The rally is one of the few things people outside Hollister, California know about this otherwise little-known town.  A typical scene at the rally might look like this: 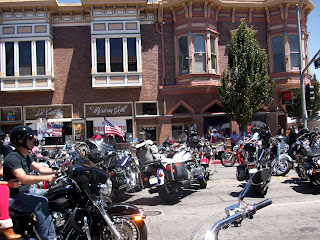 This is from a couple years ago. Though I went this year, I didn't get any pictures. But it always seems the same to me.

What is going on in your neck of the woods for July 4th?

Posted by Jamie Ghione at 8:03 AM No comments:
Email ThisBlogThis!Share to TwitterShare to FacebookShare to Pinterest

Definitely agree with this one.


The Fireworks Test
Blogthings: 100's of Fun, Free Quizzes!
Posted by Jamie Ghione at 8:44 PM No comments:
Email ThisBlogThis!Share to TwitterShare to FacebookShare to Pinterest

Found another challenge. It started yesterday, but I saw it just now on someone else's blog. This one runs until October. Sign up and see more details here.


·         20 points:  (Submitted by Christina) Read a book from the following list of books made into movies:   Miss Peregrine's Home for Peculiar Children--Ransom Riggs