Still Hesitant About Some Things

The other day on Facebook, I saw  in my newsfeed something for the local stage company. It was about the auditions for the upcoming kids show Frozen Jr. Just a little over a year ago, I attended the performance of California Suite by the sated company. They had just cast their next play, Beauty and the Beast Jr, which then got cancelled when qurarantine began. It was finally held in October and November 2021. I'd wanted to see it, but eventually decided not to. And now I feel the same way about the next play.

I was hesitant about events like these once they started taking place again, and am still that way right now. I learned about a 70s dance party in my home town, another something I might have liked to have attended. But I chose not to. And the place that put on the dance party last night has events planned for Mardi Gras and St. Patrick's. And there have been moves playing I've wanted to see. I don't know when I'll feel safe enough to go to these things. It would be so much fun to do this all again. I have not been to a movie since November 2019. Even before COVID hit, there were not a lot of movies playing that I wanted to see.

Posted by Jamie Ghione at 7:38 PM 3 comments:
Email ThisBlogThis!Share to TwitterShare to FacebookShare to Pinterest

Another Rejection and Online Traffic School

Once again, I received a rejection email for my memoir, from the last round of submissions I made for both my manuscripts. Now it's time to send them out again. Will let you know when I do and what I hear later.

And last December, just before New Year's, I got stopped for speeding and attended traffic school online. The class was self-paced and after signing up yesterday, I immediately began the class and finished it today. I didn't pass the final test the first time, and I only got one chance to retake it. They allowed you to review the material on the site when taking the final. So when I retook the test, I looked over the material carefully. I passed this time. I had until April to complete the class, but wanted to get it done as soon as I could. And I'm glad it's now over and done. This was the first time I'd done traffic school (yes, I have had to do it before) online. No in-person classes were being held, likely because COVID is still looming.

And now I wanted to get my taxes started soon. Another thing I want to get over and done as soon as I can.

Posted by Jamie Ghione at 7:52 PM 5 comments:
Email ThisBlogThis!Share to TwitterShare to FacebookShare to Pinterest

I Don't Listen to Spotify

No doubt by now you have heard about what has happened with the music service Spotify. I have never used this, or any music service, and never will. I could never get into the kinds of things. I haven't listened to much music lately. I still have my large collection of CDs that I am hesitant to let go of, though I have not listened to them much in years.

Nevertheless, I could not help commenting on on some of the posts that came up on Facebook about Spotify. One friend posted the following:

And I responded with:

I will never listen to music that way. Though it's been years since I've played any of my CDs. So many I still have since the early 1990s and I only have three of the artists mentioned above among the collection. Any guesses who? Now, if Elton John, Bob Dylan, and Yes will join those already on the list.

And I could not help sharing the following Spotify memes: 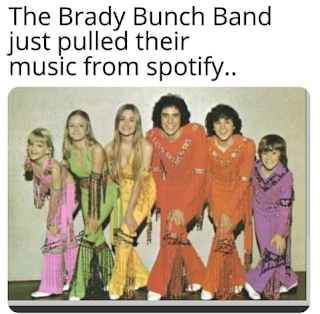 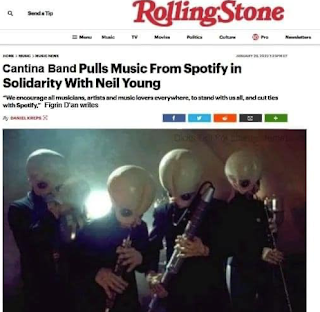 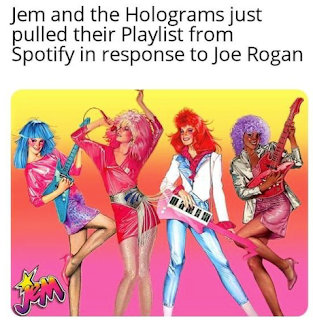 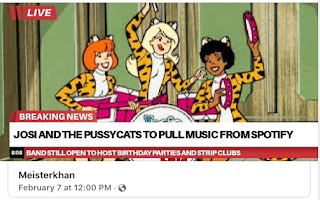 This is as much as I want to say about all this 🙂
Posted by Jamie Ghione at 8:09 AM 2 comments:
Email ThisBlogThis!Share to TwitterShare to FacebookShare to Pinterest

Here is the card for February. 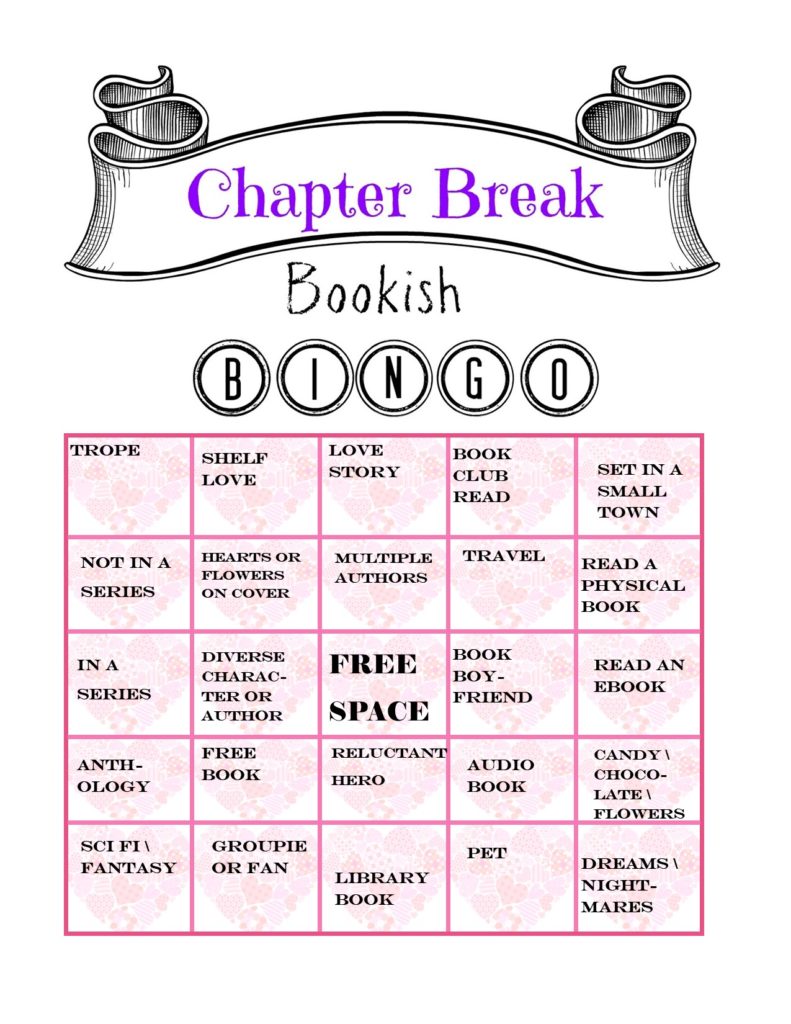 My Books:
25 squares completed on February 24
Posted by Jamie Ghione at 8:43 AM 2 comments:
Email ThisBlogThis!Share to TwitterShare to FacebookShare to Pinterest

This was the guy who designed the graphics for the annual Blogging A to Z event. Last year was the first time I had ever participated in the A to Z, though in previous years, I had seen other bloggers' posts. All that time I wondered if I'd ever join, and last year I took the plunge. As such I was not familiar with Jeremy Hawkins's work until then, but I am sad just the same 😢 I enjoyed the graphics he designed for the 2021 event. I pasted each one on each of my entries. I loved the colors he used for each letter. Each one added character to each post. R.I.P.
Click the links below to view and purchase his merchandise:
T-shirts: https://www.neatoshop.com/artist/Jeremy-Hawkins
Art: https://society6.com/izombie
Books: https://amzn.to/3rNVlnH
And his website at: http://www.beingretro.com
Posted by Jamie Ghione at 10:37 AM 1 comment:
Email ThisBlogThis!Share to TwitterShare to FacebookShare to Pinterest
Newer Posts Older Posts Home
Subscribe to: Posts (Atom)