A followup to Monday's entry:  last night as I passed this house on the way to the grocery store across from the trailer park, I saw that the Christmas Decorations had finally been taken down. They missed one or two ornaments, and still had the light-up reindeer out (when I saw them last night) but for the most part the Christmas remnants have disappeared.
Posted by Jamie Ghione at 4:15 PM 1 comment:
Email ThisBlogThis!Share to TwitterShare to FacebookShare to Pinterest

I never would have guessed...

I knew I had to take this quiz once I saw it. was "Brady Bunch" related.
As always, I am surprised by the results of these quizzes:
What Brady Are You?
Blogthings: Learn Something Surprising About Yourself

Posted by Jamie Ghione at 8:17 PM No comments:
Email ThisBlogThis!Share to TwitterShare to FacebookShare to Pinterest 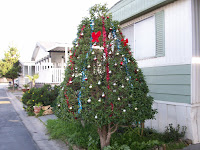 How long do you wait to take down your Christmas decorations?  A day or two maybe?  That's why I usually try to do.  I missed my wreath hung over the door when I removed my decorations this past Christmas season and didn't notice until two days after New Year's Day.  If you wondering why I'm asking this now, it's because for the last two months I've been noticing that one of my mobile home park neighbors has had a Christmas tree still up in front of their trailer as of now.  What I did not know until the other day was that the tree was actually growing in the ground in front of their house and that it was just decorated with tinsel and ornaments.  They've been neglecting to remove these decorations.   I also noticed today that they've also left up a light-up reindeer. 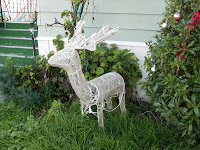 It's going to be Easter soon.  These people need to get this Christmas decor down.  Maybe they should decorate the tree with plastic Easter eggs?  And then stick in a USA flag  and red, white and blue streamers for the Fourth of July?
I have a couple of trees in front of my mobile home that could easily be decorated. Unfortunately, there's no outside lighting (except on the front porch and in the driveway) so no one would be able to see the decorations after dark.  They probably barely notice my papier mache ghosts I place on the kitchen window ledge and the ghosts I tape to the kitchen window every year for Halloween, even with the orange lights hanging in the window.  And the stuff I place on the porch that faces the road, even with the light on.  I don't know about the people in this house (nor have I ever met them), but thye must have some way of lighting the front of their house if they put up decorations like these.  I don't know how they do it.
Posted by Jamie Ghione at 5:34 PM No comments:
Email ThisBlogThis!Share to TwitterShare to FacebookShare to Pinterest

It's rare that I ever see more than one movies in one weeks, but this past week I saw three.  First was "Percy Jackson & the Olympians: The Lightning Thief."  I never read the book, nor did I know until just the other day that there is a book.  A little suspenseful, but OK to watch. Not something I was eager to see, but it made for a good night out of the house.
Next came "Precious" on Wednesday. I'd been wanting to see this for some time now and I

knew it would likely be shown as part of the  Wednesday Cinema Arts series at my local movie theater.  The Cinema  Arts series is on hold during summer and winter since many major releases during those season come out on Wednesdays.   It  returned this past Wednesday with
"Precious."  This is a very thought-provoking film that is bound to bring tears to some eyes.  My family friend who attended the movie admitted afterward to crying (I didn't see her crying during the performance).  This is another film worth seeing. It took months to get to see  it but it was worth the wait.
On Thursday came "Valentine's Day."   Not having to work that day, I decided to see this

one since I'd wanted to see it when I first saw the previews.  It was quite interesting with its ensemble cast.  If you like any of the many actors in this film, it'll be worth seeing for that reason alone.
And I cannot wait until March 3, when "An Education" will be shown in Hollister as part of the Cinema Arts series.  Since I first heard about this film I'd been wanting to see it and hoping that it would be part of the Cinema Arts series.  I'd pondered going to either Monterey or Salinas to see it, but have been either too tired or too busy to get out of town (and I don't wan to drive in the rain when not necessary).   Once the film got several Oscar nominations, I then hoped even more that they'd bring it to my town. And now they are at last!   I will be there.  It should be good.  The wait is almost over!

Posted by Jamie Ghione at 5:15 PM No comments:
Email ThisBlogThis!Share to TwitterShare to FacebookShare to Pinterest

I just read on this blog about Valentine's Day.   Just because I have no man, it doesn't make me hate the day.  As a kid, I always gave and received those Valentines for kids at school, you know the ones with animals and cartoon characters.  Every year I always try to buy those candy hearts. I got a small box of candy hearts yesterday at 7-11, and looked for more today at Dollar Tree and did not find any. I jumped ahead to the next holiday, buying a $1 box of marshmallow Easter bunnies.
Posted by Jamie Ghione at 8:59 PM No comments:
Email ThisBlogThis!Share to TwitterShare to FacebookShare to Pinterest

Not watching the game

I'm not a sports person and I'm not watching the Superbowl today.   Needing to get a cell phone card by Tuesday was one thing I had planned for today, but when I went to Target today, they did not have the one I need.  A drive over to Safeway led me to a packed parking lot, with people no doubt getting beer, soda, chips and other necessary snacks before the game. And those who just needed to get food and weren't able to get to Safeway yesterday. I was unable to get to Safeway yesterday only because I was doing my taxes.  It was as bad as--if not worse than--trying  to go to the store on the day before Thanksgiving or on Christmas Eve, something I tried hard to avoid in recent years. Maybe the Superbowl really is a holiday?  Savemart, on the other hand was less packed (and that usually is the case) but they too did not have the phone card I need.   So I went home decided for a while and  to see what time the game starts so I could make an attempt to go to Safeway. Looking at the TV insert from the Sunday paper, I discovered the game started at 3:30, with a pregame show at 3PM, I went to Safeway then.  The parking lot was still full, but a few spaces were available.  Success!
And I won't be watching the Olympics starting this Friday.  My local NBC station carries Oprah Winfrey at 4PM on weekdays and will be showing her show at 2PM starting on February 15 for two weeks only. I will either be turning off the TV when the games come on, or I will be playing whatever Netflix movies I receive over those two weeks, when I receive them.  I know I'll be receiving "Marley and Me" by the end of this month.  As I stated earlier, I bought and read the book last month and am glad to have read it before seeing the movie.
Posted by Jamie Ghione at 4:56 PM No comments:
Email ThisBlogThis!Share to TwitterShare to FacebookShare to Pinterest

I would never have thought this...

What Circus Act Should You Perform?
Blogthings: A Fine Line Between Insight and Stupidity
Posted by Jamie Ghione at 7:01 PM No comments:
Email ThisBlogThis!Share to TwitterShare to FacebookShare to Pinterest
Newer Posts Older Posts Home
Subscribe to: Posts (Atom)