Here is this week's assignment from The League of Extraordinary Bloggers:

The Oscars. ... interpret it as you will!
Well, since we can interpret as we will, here's how I chose to do that.  Rather than run down this years Oscar winners (I believe everyone knows the full list by now) or rant about who didn't get nominated or think that someone else should have won over those who did win, I tried hard to come up with something different.  Oscar the Grouch and Oscar Madison have already been written about by several other participating bloggers (including a mash-up of those two characters), as has a list of Oscar-winning movie songs. So what else is there?
Well, in the days after the nominations for this years Oscars were announced, I began Googling "Oscars" and phrases like "Oscar snubs" and "Oscar mistakes" and as I typed in the word "Oscar" I was mentally spelling it and into my head popped a famous TV commercial jingle.
I'm sure many of you remember the famous commercial for Oscar Mayer bologna with the little boy fishing.  In case you've forgotten, here is the commercial below:


It seems hard to hear the word "Oscar" spelled out without getting this jingle stuck in my head.  Same thing happens when I have to spell out a name ending in "-mayer" or "-meyer" without getting the M-A-Y-E-R part in my head.  This has become as inevitable as hearing or seeing the word "Kodachrome" without getting Paul Simon's famous song stuck in my head. I know I'm not alone on that one.  And just recently I was calling Fandango.com's 800 number to check a movie time.  I spelled out the name as I tried to find the corresponding numbers on my phone keys, and reciting the last there letters, N-G-O, made em think of the song about a dog called "Bingo" in which the name is spelled out.

But back to Oscar.  I decided this would be my interpretation of Oscar since no one else came up with this one.

And I had a flashback to my high-school French class. We did a song in French about our school that was sung to the tune of the Oscar Mayer bologna jingle, which a classmate inevitably called "The Bologna Song." The song went:

Nos les aimons, les champions (We like them, the champions)
Finnisant toujuors roi de balon (Always finishing king of the ball)
Parce que vous savez (Because you know)
Il faut jouer (You have to play)
Avec E-S-P-R-I-T. (With spirit. Esprit is French for spirit).

(My apologies to those who don't know how to pronounce French.)

OK, someone else did mention Oscar Meyer hot dogs, which themselves had a memorable jingle, but it was the bologna jingle that came to my mind first.

Along with the bloggers linked in the first and last paragraphs, here are this weeks other participants:
Top Hat Sasquatch
The Combat Workshop
That Figures
Branded in the 80s
Achievements in Gaming
Fortune and Glory Days
Henchgirl
Thirty-ish Year Old Boy
And Cool and Collected's own post
Posted by Jamie Ghione at 3:18 PM No comments: Links to this post
Email ThisBlogThis!Share to TwitterShare to FacebookShare to Pinterest These are the only ides I've come up with.  I'm curious to see what others will come up with for this one., since I'm early this week (I've only ever been this early once before.)  Here's the only other link so far, as I mentioned earlier:
Fortune and Glory (Days)
Posted by Jamie Ghione at 5:25 PM No comments: Links to this post
Email ThisBlogThis!Share to TwitterShare to FacebookShare to Pinterest

The Snack Test
The First Rule of Blogthings Is: You Don't Talk About Blogthings
Posted by Jamie Ghione at 1:56 PM No comments: Links to this post
Email ThisBlogThis!Share to TwitterShare to FacebookShare to Pinterest

Quiz: What is Your Valentine's Day Personality?

What's Your Valentine's Day Personality?
Blogthings: If Quizzes Are Outlawed, Only Outlaws Will Take Quizzes
Posted by Jamie Ghione at 10:09 AM No comments: Links to this post
Email ThisBlogThis!Share to TwitterShare to FacebookShare to Pinterest

The Handbag Test
Blogthings: Free Quizzes for Everyone
Posted by Jamie Ghione at 4:36 PM No comments: Links to this post
Email ThisBlogThis!Share to TwitterShare to FacebookShare to Pinterest

The Argyle Test
Blogthings: If Quizzes Are Outlawed, Only Outlaws Will Take Quizzes
Posted by Jamie Ghione at 11:32 AM No comments: Links to this post
Email ThisBlogThis!Share to TwitterShare to FacebookShare to Pinterest 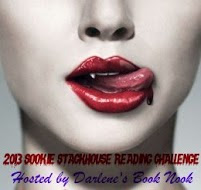 Although I hosted this challenge for 2012, I did not make any headway in this series. So, I'm going to host it again for 2013!

The books in the Sookie Stackhouse (aka Southern Vampires) series by Charlaine Harris are:


Please read below for the challenge guidelines.


Here are the challenge details:
1. The challenge will run from January 1, 2013 to December 31, 2013. Books must be read during this time-frame to count.
2. You can join the challenge at any time! All books read in 2013 count for the challenge, regardless of when you sign up.
3. This challenge can cross-over to your other reading challenges.
4. You do not need a blog to participate! If you are not a blogger, you can post your reviews at Goodreads, Shelfari, or LibraryThing and link them up here.
5. All formats of books are acceptable: Bound copies, e-books, and audiobooks (as long as they are unabridged).
6. There are four levels for the challenge:
a. Level 1 "Just A Drop":Read 1-4 books in the series.
b. Level 2 "A Small Bite":Read 5-8 books in the series.
c. Level 3 "So Thirsty": Read 9-12 books in the series.
d. Level 4 "Hungry For More": Read all 13 books in the series!
7. When you write your sign-up post, you must choose your level. You can go up but you cannot go down!
8. There will be a separate linky for your reviews, which will be posted on THIS page.
9. There will be a linky for your wrap-up post at the end of the year.
10. Create a sign-up post and link back to this post. Sign up with Mister Linky below! Be sure to use the direct url to your sign-up post and not the url to your blog.
11. Grab the challenge button and post it in your sidebar. Copy and paste [the] HTML code into an HTML gadget for your sidebar.

I'm choosing Level 3, in case my library doesn't get the last book when it comes out this year.  But if it does, I will go to Level 4. I'm also doing a complete the series challenge, so this will work for that, too.

Posted by Jamie Ghione at 9:19 PM No comments: Links to this post
Email ThisBlogThis!Share to TwitterShare to FacebookShare to Pinterest
Newer Posts Older Posts Home
Subscribe to: Posts (Atom)