The Story That Will Never Happen 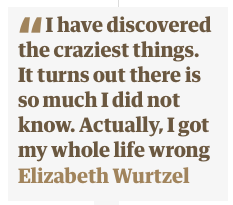 The passing of Elizabeth Wurtzel last week leaves one thing that will never come to pass. In 2018, she wrote about learning the truth about her parents. She later said she wanted to write a new memoir. From a tribute today article in The Guardian:

Sadly, this will never see the light of day. I so would have been excited to read this new book. I'd be anxiously awaiting its release. But it won't happen now 😥

But even though this new story will never happen, I am glad I got to hear her original story. And that she lived to tell her story. As she stated in the epilogue to Prozac Nation:

“… Every person who has experienced a severe depression has his own sad, awful tale to tell, his own mess to live through. Sadly Kurt Cobain will never get that far. Every Day, I thank God I did."

And I too am glad she got that far. And that I have gotten that far as well. Even though she'll never see my story, I am hoping that there will be people who will see it. FYI, I recently sent it to a site I discovered on Manuscriptwishlists.com. I immediately received an automated response email saying that if I do not hear from them in three weeks, they they have decided not to accept the work "at this time." Still got two weeks left till I hear from them (if interested, they will request more of my manuscript). Writers Lab resumed last week after winter break and the leader emailed me a link to find other places that accept memoirs. I will have to check this one out soon.

If one story doesn't happen, others will.
Posted by Jamie Ghione at 12:35 PM
Email ThisBlogThis!Share to TwitterShare to FacebookShare to Pinterest