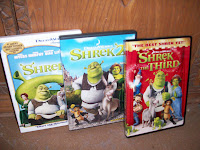 Finally got a copy of "Shrek 2" (I'd already had the original and the third one on DVD), and watched the second one yesterday. It's has been three years since I've sen that one; I borrowed my aunt's copy in 2007 when I awaited the premiere of part three that year. Now I plan to watch "Shrek the Third" later this evening. If not tonight, then one night this week before Friday.

It doesn't seem all that long ago when the first of this film series came out in 2001. I still recall seeing the large standing poster promoting the upcoming film. I did not know much about it when I first saw the poster; nevertheless, it looked like it would a good film and I knew I'd be going to see it once I got the chance. And I did so the afternoon of May 19, 2001, a rare Saturday off from work that year. I later rented it on VHS in 2002, months before I got my DVD player (for Christmas that year). I got the DVD in 2005.

Only four more days till film number 4 is released. Summer film season, here I come!
Posted by Jamie Ghione at 7:19 PM
Email ThisBlogThis!Share to TwitterShare to FacebookShare to Pinterest