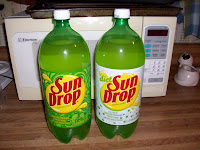 I first learned about Sun Drop soda about 10 years ago, but until now it was never sold anywhere near me. On New Year's Eve, on the way to work, I stopped at Walmart to use their restroom and on the way out of the store, I spotted a display of bottled soda including Sun Drop. The man who was stocking the stuff said that Sun Drop is like Mountain Dew. I was aware of that fact from what I have read about the stuff. But this was the first time I had ever seen it for sale anywhere near where I live. I was tempted to go back to Walmart after work to buy a bottle (they're selling it for 88 cents) but totally forgot. Yesterday, however, I went and bought two bottles--one of regular and one of diet. 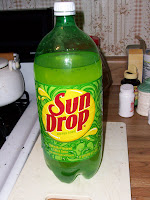 I must admit I'm not a regular Mountain Dew drinker and probably won't be buying a lot of Sun Drop either. I already drink too much caffeinated diet cola, and Mountain Dew and its knockoffs have even more caffeine than do colas. But once in a while I may get some Sun Drop as I have since tasted the stuff and it it tastes quite good. Their website says that Sun Drop is also made in a caffeine-free version (regular and diet) and a cherry-lemon flavor. None of these were available at Walmart, at least not in the two-liter bottle display in which I spotted the stuff. I have not yet looked in the aisle in which Walmart regularly displays sodas, including the six-, 12-, and 24-packs of canned soda. Nor have I yet looked to see if Sun Drop is being sold elsewhere near me. I didn't even think of all this until now. I now plan to see if Safeway Kmart, or Target have any of the Sun Drop flavors.
From Wikipedia:

Sundrop has maintained popularity in many parts of the southernUnited States and parts of the Midwest, including Wisconsin and western Minnesota. Like other regional drinks with a cult following, fans outside bottling areas have been known to pay large amounts to have the drink shipped to them.

This was like getting to taste something new though it's not a new product. It was introduced in 1928 and patented in 1930. Its current manufacturer is Dr Pepper Snapple Group.
If you cannot find Sun Drop in your area, you can purchase it from this website. I now remember that I once wanted to order some of this stuff when I first learned about it about none or 10 years ago. Never went through it with then, though and completely forgot about it until I suddenly spotted the soda at Walmart last week.
Posted by Jamie Ghione at 6:55 PM
Email ThisBlogThis!Share to TwitterShare to FacebookShare to Pinterest

thats bullshit they changed the entire logo of sundrop and even changed the ingredients when they went national, ps im from rite down the road were they were invented, this shit is known to give you kidney stones quick like.

It is very popular here in North Carolina!!