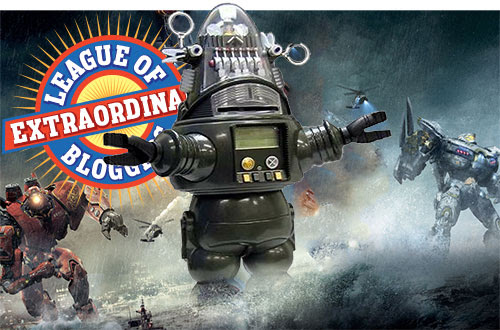 Danger! Danger! Danger! Pacific Rim has finally hit the theaters, and it seems like everyone is now an expert on giant monster-fighting robots. I thought it would be fun to talk about all the different mechanical wonders that have appeared in our pop culture. This week’s assignment for the League of Extraordinary Bloggers…
Not exactly a thing of mine, but something did come to mind when I read this week's assignment: the robot called Hymie on the 1960s spy-spoof sitcom "Get Smart," created by Mel Brooks. I remember seeing reruns of the show on a TV station in San Francisco in the 1980s and on Nick at Nite and TV Land in the 1990s and 2000s.   I also saw the 2008 movie based on "Get Smart" that year on opening day and recently rented the disc from Netflix. I also recently rented  from Netflix (just before the "Get Smart" movie) the 1989 TV movie "Get Smart, Again!" which reunited most of the TV show cast.
This made me think of the character Hymie, who was only on the show in six episodes over a five-year run and was only in the film briefly as well.  Yet many who remember the show will remember how Hymie always interpreted commands literally.  Like being told to "grab a waiter" at a restaurant and arriving with the maitre d' carried over his head. Or firing a gun at a light switch when told to "kill the lights." Or  preparing to literally "drive [Maxwell Smart} up the wall" (in the 1989 Tv movie), but Max stops Hymie from doing so.  The character was also impervious to bullets, weighed 982 pounds and had an IQ of over 200.  He also came with rechargeable batteries.  He was created by the evil organization KAOS, but later taken over by CONTROL [link].

Hymie was played By Dick Gautier on the show and by Patrick Warburton in the 2008 movie.

Posted by Jamie Ghione at 11:27 AM
Email ThisBlogThis!Share to TwitterShare to FacebookShare to Pinterest