Got Some More Feedback

Sometime ago, I happened upon this blog, and this post on the blog 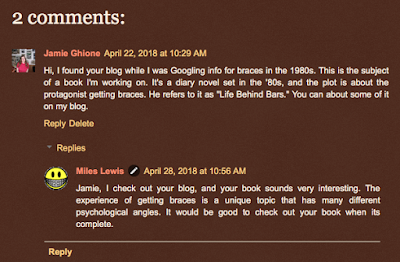 Then last month, I received an email from the blogger, and I asked if he wanted to read my work-in-progress. I then emailed it to him and just yesterday, he wrote that he finally got to read my story and said he really enjoyed it. He also named some suggestions, including incorporating more references to 80s pop culture, such as music and movies. I'd mentioned in this post on my blog how I had made two references many may not remember.  Here are some of the suggestions made in the email (I deleted the last paragraph of the email message because it gives away the ending):


I finally was able to read your story, and I really enjoyed it.  Thank you for allowing me a preview of the story. In particular, I really enjoyed the interaction between Martin and his school friends as he approaches getting braces, and then gets them, and is at first nervous, and finally shows up at school with braces. I thought all the accounts of his worrying about what other kids thought, and being aware of all the kids that had braces, and of those that picked on kids with braces. Also, the interaction between Martin and relatives and other adults was great. I found those to be great descriptions.

If you dont mind, I have a few suggestions. One possible idea would be to incorporate more references to '80s popular culture, such as music and TV shows that were popular at that time. I do note that you referenced Kim Fields from Facts of Life... which was good. But maybe reference some musical interests of the diary writer... music was such a big deal for youth in the '80s, especially with MTV being so big.  It would make sense that the diary writer would have made some comment about music and what was popular circa 1983. I remember it well, it was the era of synth pop like Eurythmics and Thomas Dolby ("She Blinded Me With Science"), and of Michael Jackson, and of Duran Duran... all of those were definitely big by the end of the year.  Also, there were movies like ET (which came out in 1982 but was still influential by '83), and the final installment of the original Star Wars trilogy ("Return of the Jedi" came out in '83).

In particular, I figure that a sensitive, shy, and awkward kid may have found solace in arts and popular culture.  Stuff like music, and movies, and TV.  Especially escapist type stuff that young boys enjoy...sci-fi, for example.  I know this because I was an shy, awkward kid (in the 80s no less), and music and sci-fi always served as an escape for me.  I could only imagine that as the diary writer  tries to deal with his awkwardness and shyness... and things like having to get braces, that he would perhaps take solace in hiding out in his room and listening to music (as I did growing up), or in sci-fi movies or the like.  It would perhaps add a bit to his personality.

Also, as for the braces angle, there are even some movies and actors that had braces (like Kim Fields). I think immediately of Anthony Michael Hall, who had real braces in all of those early and mid '80s movies.

I did make some sci-fi references, such as A Wrinkle in Time (referencing a line from the story) and The Hobbit (the cat called Frodo). I guess it just slipped my mind to make any references to music or movies. The family doesn't have cable so making a reference watching MTV is out.

What do any of you think of these suggestions?

Posted by Jamie Ghione at 7:59 PM
Email ThisBlogThis!Share to TwitterShare to FacebookShare to Pinterest