What Makes You a Copycat Writer?


7 Writing Mistakes to avoid in fiction 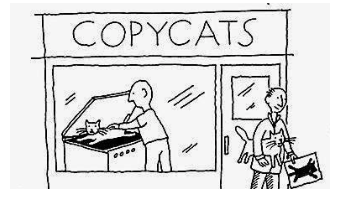 One point that I want to comment on is this one:

After the Harry Potter series many writers, all of a sudden, began writing stories with magic as a central premise. After the Twilight series, every other manuscript that landed on a publisher’s desk was about vampires. Don’t fall prey to a seasonal topic.
Never ever copy other authors. Yes, you can be inspired by some writers; the way they use words, the way they bring about twists and turns, but be original! You are different and that is the sign of uniqueness. If readers feel your writing is similar to “……..”, it is not a matter of pride; it means “You are just one of them!”
Ensure you are inimitable, distinct and matchless in every sense and you will have a winner in your hands!
This was I felt I would be doing when I got the idea to write about my experience on Prozac. It had already once been famously written about, and I felt I was just copying the author. But those around me convinced me that this was not true, since i would be telling my own story. In this blogpost, the author writes:

I’m glad Wurtzel wrote this book, because now I  don’t have to. Years ago, a book about my life would have closely resembled hers, as far as the inspiration meter. Low. ...

This was kind of what I had thought at first, that my story would sound too similar to what had already been told. The blogger could have easily written her story. Though I'm not sure how the "copycat" rule applies to a memoir.

Now that I have been writing a diary novel, does that necessarily mean I'm copying others that have been published? It wasn't any one such book in particular that made me want to write this, just the format itself. I wanted to try writing that way.

Have any of you writers felt this way?
Posted by Jamie Ghione at 8:44 PM
Email ThisBlogThis!Share to TwitterShare to FacebookShare to Pinterest