Are Rules Necessary in Writing? 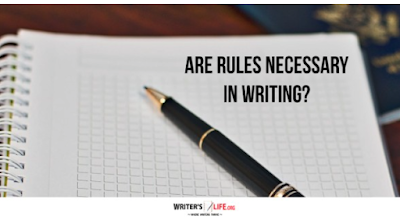 There are so many rules that writers are given to follow to make their writing good. However, are they really necessary? Are there any that can be broken? And what happened to creative freedom?!
Let’s take a look at some of the rules of writing and examine whether or not they are really necessary.
Keep sentences short and language plain
Short sentences and simple language certainly have their place. But this rule can’t apply to every piece of writing, fiction or otherwise. The better thing for writers to do is always keep their reader in mind. Get to know your intended audience. If you do, you’ll know what they can handle and if you want to use more academic or complicated language then as long as you feel confident in your reader, it’s no problem.
Don’t overwrite
Writing too elaborately can be off-putting. However, some pieces of writing are exquisitely written precisely because of the beautifully descriptive, ornate and arresting imagery that the author uses. Descriptive writing has its place - just like any other kind of writing, if it is done well then it works!
Write every day
Writers are often told that to improve they should write every day. However, this just isn’t possible for some writers, and they shouldn’t feel any less of one because they don’t. You have to write the way that works for you, and as long as you are happy with the pace of your progress, then that’s all that really matters.
Set and stick to your goals
Writers do need to set goals. Without them, it is too easy to get distracted and never get anything done. How and what those goals are is entirely up to the individual though.
Show don’t tell
Show don’t tell has been a writing rule that appears time and time again. However if taken too literally it can leave some writers painstakingly trying to remove every instance where they tell the reader something - to the detriment of their work. Sometimes telling is necessary, more economical and it just works. Writers should be aware of that while also remembering that if they ONLY tell their readers the story, it may be difficult for them to become fully immersed in the world and characters they are trying to make come alive on the page.
Read as much as possible
This is a no brainer. Reading is the elixir of life for writers and is the best way to learn and improve. So read as much as you can!
Write what you know
Another common rule for writers is to only write what they know. However, taken too literally and this can stifle a writers creativity, leading them to believe that unless they have had specific experiences or encounters, they shouldn’t write about them. The beauty of being a writer is that you can use your imagination, and besides, you can research almost anything these days. So don’t write about what you know, write about what you love instead!
At the end of the day, the most important thing is to enjoy your writing; otherwise, you are kind of missing the point. So if you feel the writing rules are stopping you from writing the way that makes you happiest, then perhaps those rules should be broken after all.
What do you think? Do you believe these rules are still necessary? Are there any other writing rules that you think should be broken? Let us know.

It seems weird to see this article after writing several posts in which the idea of breaking rules when writing has come up. In life in general, rules were meant to be broken. This is also true in writing, as this article says.

Since resurrecting my creative writing group at work and joining the I have been trying to write more since I have been slow at doing so. I invited the former owner of the local bar who self-published her memoir to join the group and she said this is the kick she needed to get writing again. I've bene trying to write more, but as the article says, it isn't possible for some to do and they shouldn't feel like less of a writer for not doing so. Whenever someone at work said they have been working on their writing, I would sometimes feel guilty about not doing as much on mine. But now I don't feel as guilty, because I have to do what I can when I can. It's all bout how each person does it for themselves. Though when others say how much and how often they have been working on their writing, it can give me the kick I need to get working on mine even more. This is a way to encourage one another to write more, but still do as much as each person can each time.

Writing about what you know--I have heard that one many times and have at times imagined the scenario of others reading what I write and saying, "This is about me!" This has been used as a gag on TV shows and I have wondered how often it happens in real-life, and how angry a real person gets when seeing such a thing. When I worked on my memoir, I chose not to use real names of others involved, including my own family, out of fear of lawsuits or even just general anger, should the book ever see the light of day in print. When writing my diary novel, I mostly drew from what I remembered of having braces in the 1980s, but added some things that didn't happen to me, like getting sick on Thanksgiving or playing the main characters in a  school play. The first one just dawned onto me. The second idea seemed typical of books and movies in which the popular kids try to get everything and are angered when the nerds get it instead. The nerdy kids in my books get the leads in the play, something the head mean girl had hoped she'd get. She then gets angry over being cast as a servant. This sort of scenario my not have happened to me personally, but it seemed typical of the time period in which the story is being set.

I have been reading as much as possible and tend to read several books in on month. So I've got that one covered🙂

What rules have you followed and broken?

Posted by Jamie Ghione at 9:06 AM
Email ThisBlogThis!Share to TwitterShare to FacebookShare to Pinterest

We have a friend (who sees himself as a writer) who doesn't read. I would dispute his self assessment.

I was really hung up on the show don't tell for most of my writing career. I'm finally relaxing that. There are spots it adds a layer to writing as long as its not overdone.
Good list, Jamie.

It doesn't make sense to me either, EC.