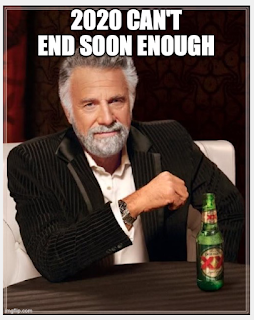 Last night on the 11 o'clock news in my area, an anchor said that 2020 can't end soon enough, that is has been going by slow but fast. Totally agree on that. How did it get to be the end of August already?

I came across this on my Facebook memories today: 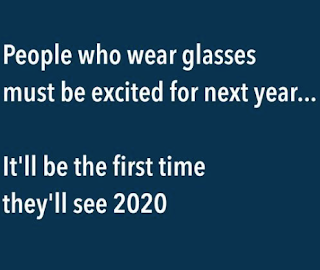 Well, little did they know what they were going to see. ...

And this morning I came across this article from the beginning of this year. Note this paragraph:

... Its (sic) almost science fiction writing that. For instance, I’m going into my 34th year writing this column and so much has changed. It seems spacey, that I was writing this piece 20 years ago and I was talking about something called Y2K. 20 years later, I’m sure there are some of you who don’t know what that is. Needless to say, typing the year 2020, seems Orwellian. Time keeps marching on. ...

It has seemed more sci-fi-like than what the story above, or anyone for that matter, may have predicted. Now read the last line in the story linked above. That certainly hasn't happened, and there are still four months left in the year, but it still isn't going to happen from the looks of things.

Many were looking forward to Cinco de Mayo falling on a (Taco) Tuesday and and found it ironic that the holiday was threatened by a virus that has the same name as a Mexican beer: 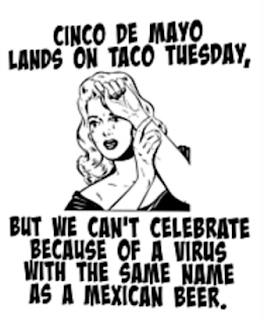 And as I have pointed out, Halloween--a day focused on mask-wearing--now seems threatened by mask-wearing being mandatory. And many were looking forward to the fact that the holiday is on a Saturday this year. Such irony!

It has been 20 years since many people worried about Y2K. I entered the new year expecting people to remember this. But little, if anything, was said, even before the outbreak began. And concerns over the pandemic have superseded most other news stories, except the protests and the upcoming election. This year also marked 50 years since the first Earth Day, 40 years since the eruption of Mount St. Helens, and 75 years since World War II ended. These might have been celebrated more if not for the pandemic, and most barely got  a passing mention, if anything at all. It was also 40 years since CNN debuted, something the channel itself barely acknowledged. The centennial of women getting the right to vote has been recognized this past week.

As always, I'm doing my best to stay safe in this difficult time and reminding others to do the same.
Posted by Jamie Ghione at 10:19 AM
Email ThisBlogThis!Share to TwitterShare to FacebookShare to Pinterest