This will be my second time participating in the blog Cool and Collected's feature "The League of Extraordinary Bloggers. This week's assignment is: 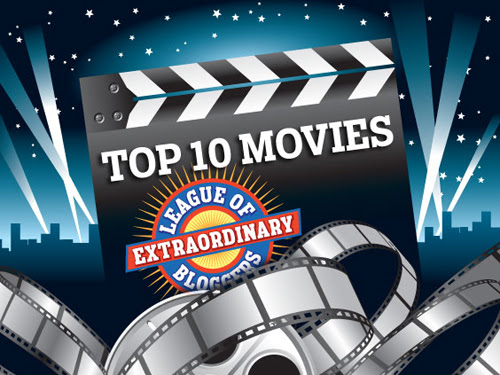 This seemed fairly easy, but the hard part was narrowing it down to just 10.  I'm only including ones I have on DVD.  These are in no particular order.

2.  The Brady Bunch Movie  I knew I had to see this since I love watching reruns of the TV show.   Another I have seen numerous times since its release.  Some of the funny parts re the modern-day references that confuse the Bradys, like when Marcia asks a model "What have you modeled for?" and Marcia misinterprets it when the girl says "Guess."

3.  Get Him to the Greek  Saw the previews and knew I had to see it.  Very funny spoof of the music industry.  I then had to rent My Favorite Year,  whose premise was nearly the same as this one.

4.  Marley and Me  When I saw the previews, I knew I had to see this one.  I never did get around to seeing in the theaters, though and added it to Netflix.  I then decided to read the book first,  and received the movie more than month after reading it.

5.  You, Me and Dupree  A rare event when I saw this in the theaters more than once before getting the DVD.   Loved the minute I first saw it.   Anything with Owen Wilson is sure to be funny.

7.  Very Brady Sequel  Just as funny as the original, as the Bradys are just as confused as ever.

8.  Shrek  Loved them all, but the first is the best of all.  Seeing the standup poster in the theater lobby in 2001 made me know I wanted to see it.   Who knew then that it would be such a smash?

9.  Blades of Glory  I'll watch just about anything with Will Ferrell, and  having seen Jon Heder in Napoleon Dynamite and The Benchwarmers,   I knew I had to see this, as well as having seen the previews for this one.   Loved this one, just like I knew I would.

10. Grown Ups  As soon as I knew about this one, I could not wait.  It was just as funny as I thought, and I could not wait to get the DVD.   I'll watch anything that has Kevin James or David Spade or any of the others in the ensemble.   There was hardly a scene that didn't evoke a laugh.


As I said earlier, it was hard to narrow it down to just 10, so here are five runners-up: 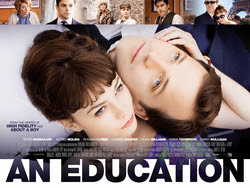 1. An Education  I waited several months till this one came to my town, and the wait was worth it.  Pretty good for a period piece, early 60s England.  I have since seen Carey Mulligan in other films but her best work is here.

2.   Old School  As I said, I love just about anything with Will Ferrell and the same can be said about movies with Vince Vaughn and Luke Wilson.  What more can I say, this is a load of laughs!

3.  Bring it On  Another one I have seen many times since it was released.  The sequels were ok (though I did not particularly like the second movie) but as is often the case, the first one id the best.

4.  The Help  I read this first, as soon as I knew about the movie. Very moving for a period piece.

5. Never Been Kissed  Yet another I have seen since it was first released and have never gotten tired of it. Drew Barrymore is great as always.


Still hard to decide on just a few as there have been too many favorites of mine.  I could go on all day with this!   This isn't even half the movies I have on DVD (and on a side note, some of those are music DVDs and TV show DVDs).  And there are lots of movies I loved but haven't gotten around to getting on DVD.  And some recent releases  I plan on getting on DVD when it comes out.  Definitely want to get  The Hunger Games on DVD.


Here are some links to other bloggers participating in this weeks assignment:
Flashlights are Something to Eat
Memories of Toymorrow
Michael May's Adventure Blog
UnderScoopFire

Posted by Jamie Ghione at 8:01 PM
Email ThisBlogThis!Share to TwitterShare to FacebookShare to Pinterest