I'm going to do this one.  I read some ancient Greek writings this past year and would like to try more.  I'm going to try to for the first level.  Sign up here. 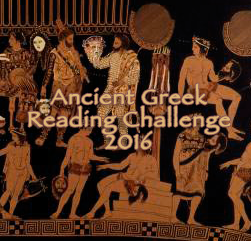 I've been thinking over the past month or so which challenges I want to participate in for 2016 and as I absolutely love Ancient Greek texts I thought I'd host my first ever reading challenge. So, I am formally announcing the 2016 Ancient Greek Reading Challenge! The premise is simple: read as many Ancient Greek plays, essays, poetry etc as you possibly can from January to December 2016! I am attaching a list of Ancient Greek works in case anyone is stuck choosing texts!

Here is what I am reading:
Challenge completed on April 18
Posted by Jamie Ghione at 10:46 AM
Email ThisBlogThis!Share to TwitterShare to FacebookShare to Pinterest