Only eight days till Halloween and four till the parties start. II'll be going to the one at work and one at the local bar.

I've got one last thing to work on for my costume.  As I said on this blogpost, I will be doing the tropical depression costume as inspired by this photo: 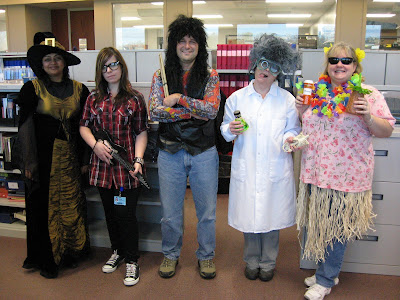 Witch, Emo Roker, Tommy Lee, Mad Scientist and yours truly dressed as a Tropical Depression (That's a bottle of Prozac I have in my hand).

I had also seen this costume and briefly considered it as well (this was before I had see the one above): I had seen this one more than year ago and written about it then. I then reconsidered this idea before seeing the one mentioned above. I liked the tropical depression idea more, but wanted to incorporate the idea of the prescription bottle as well.  I plan to wear an orange shirt under a Hawaiian-style one (which I already have). But trying to duplicate my prescription label was a bit hard. For one things, trying to center it on my printer to copy and enlarge it has been difficult to do without getting some of the image cut off. So I came up with another idea. Will explain more about this later once finished.

As I also said, I want to make these Acorn Cookies for the party on work on Friday.  I plan to make them on Thursday night before bed. Here is the recipe from a blog I read regularly. They look fairly easy. I  began looking around the local Safeway to find the ingredients while picking up my prescription last week. 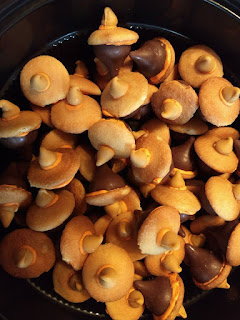 Another thing coming this week--I finally got to set up a meeting with the memoir writing teacher this Thursday afternoon in Gilroy  to look over my manuscript. Another such session will follow, I hope for next week after Halloween.

And I worked some more on my diary novel last night. I wanted to get back to it as I have said, and I did.
SaveSave
Posted by Jamie Ghione at 6:18 AM
Email ThisBlogThis!Share to TwitterShare to FacebookShare to Pinterest