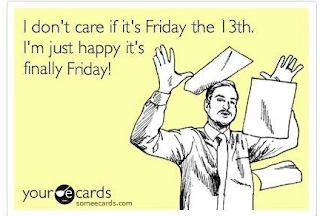 And from a post I did last year on this date that has been superstitious to many, but not me: 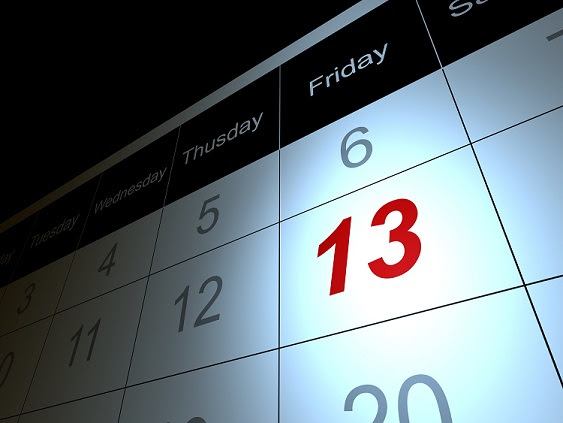 
Beware superstitious friends: It's Friday the 13th again! Here are some fun facts about the day you might not know:
Fear of the day is likely rooted in Christianity.
Jesus was crucified on a Friday and ever since the day has been associated with "general ill omen," Michael Bailey, a history professor at Iowa State University who specializes in the origins of superstitions, told USA TODAY Network. Weddings in the Middle Ages, for instance, were not held on Fridays and it was not a day someone would start a journey, Bailey said.
Thirteen guests are believed to have attended the Last Supper, the night before Jesus was killed, according to Stuart Vyse, a psychology professor at Connecticut College. And Judas Iscariot, the disciple who betrayed Jesus, is considered to have been the 13th guest, Vyse said.
The superstition's origins are mysterious.
It's unclear when Friday and number 13 became linked in the way we think of them today, according to Vyse and Bailey. There are no mentions of Friday the 13th before the 19th century.
Fear of the day itself has an official name.
It's called paraskevidekatriaphobia. Not sure how to pronounce it? NPR offers this handy audio guide.
You're not more likely to make a trip to the hospital.
A 2011 German study published in the World Journal of Surgery explored whether there is a link between Friday the 13th and an increase of blood loss and the frequency of emergency room visits on those days.
Researchers reviewed 3,281 days at a hospital facility that included 15 Friday the 13ths. They found no correlation.
"Our data indicate that such beliefs are myths far beyond reality," the study concludes.
Bonus fact: 13 is Taylor Swift's lucky number.
"I was born on the 13th. I turned 13 on Friday the 13th. My first album went gold in 13 weeks. My first #1 song had a 13-second intro," the singer told MTV in a 2009 interview.
The performer was even sued in 2014 by the clothing brand Lucky 13 for selling T-shirts on her online store with the phrase "Lucky 13" on them.
Contributing: Jolie Lee for USA TODAY Network
From Wikipedia:The longest period that can occur without a Friday the 13th is fourteen months, either from July to September the following year being a common year starting on Tuesday (e.g., between 2001–02, 2012–13, and 2018–19), or from August to October the following year being a leap year starting on Saturday (e.g., between 1999–2000 or 2027–28).(I was not aware of this until today).Also, did you know that the first day of the month falling on Sunday means the 13th will be on Friday? I've known this fact for several years now.

Posted by Jamie Ghione at 5:21 AM
Email ThisBlogThis!Share to TwitterShare to FacebookShare to Pinterest