How to Deal With Negativity About Your Writing 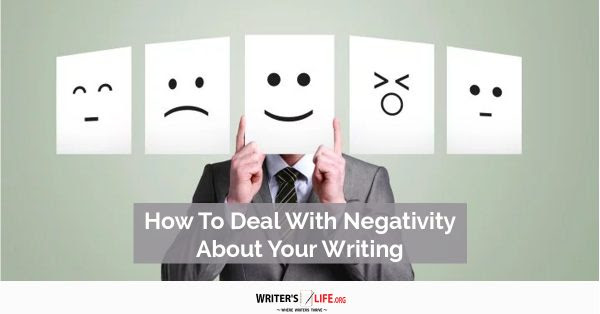 Every writer who puts their work out there is going to receive some negative feedback at some point or another. Whether that be a rejection from a publisher or an agent, or a less than impressive review on Amazon, it’s important to remember to try to deal with negative comments about your writing in the best way.
Of course, it’s going to feel horrible when it happens to you. Writer’s put so much time and effort into their writing, and sharing it with others puts them in a vulnerable position. However, there is no point in overreacting or making yourself so miserable about it that you put yourself off writing altogether.
So how can you deal with negativity about your writing in the best way? Here are some helpful tips.

Try to understand their point of view.
Believe it, or not there is always something to learn from negative commentary about your work. Pay attention to what they are actually saying. Are any of their points valid? Or are they just criticising you for no reason? Many authors complain that the negative comments they receive are unjust or not relevant to their book - if that’s the case then it’s important to just acknowledge that everyone is entitled to their opinion and move on. If however, the person who has commented has a valid point such as ‘there were spelling errors and inconsistencies’ or ‘the pace felt a little slow in some parts’ instead of just dismissing them see if you can use their comments to make your writing better!

Look on the bright side.
A review is just a review even if it is negative. It still means your book was eye-catching and exciting enough for that person to buy it over all the other millions of books out there that would have been available to them. That’s something at least. Finding positives can help you get over the negativity much more quickly!

Know that it happens to everyone
You must accept that not everyone can like what you’ve written, regardless of whether it’s a great piece of writing. Everyone has individual tastes, and even the most famous and successful of authors get negative comments about their work too. When it comes to rejection from agents and publishers the same is true. Even the very best writers have experienced rejection at some point. It’s tough, but it’s just part of the writing process, and the sooner you can get over it and move on, the better.

Use them to inspire you.
Whatever you do, never let negative comments stop you writing. If writing is your passion, you should keep going. Making a success of yourself as a writer is a battle. You’ve got to put up a good fight if you want to get anywhere.

By making sure you view negative comments, rejections and feedback as an opportunity to learn and develop as a writer, you’ll find that you quickly get over it, and get even better as a result. There is no point wasting your time feeling down about negative feedback, and the sooner you can pick yourself back up, dust yourself off and just get on with it, the better.

It seems weird that I happened to see this article just before going to see the instructor for my memoir (that will be this afternoon). But I knew this all along. When you write something, you can't expect everyone you let read it like it. And  you can't expect everyone you let read your work to have the same opinion. It's just individual tastes, as noted in one of the paragraphs above. I'm not sure how many people I know would want to read a memoir on depression (aside from those who attend mental health service with me), but seeing as some mental-illness memoirs have been best sellers, there could be some interest by different people. And I can see many people I know from my neighborhood (and even some I don't know) just wanting to read something written by one of our town's residents, no matter what the topic is. I did just act when a local bar owner released a memoir of her dealing with her husband's alcoholism. Not something I have ever had to deal with, but I do go to her bar often, so I that was my reason to read her book.

And yesterday, I began feeling anxiety (typical of me) as I began awaiting the meeting today.
Posted by Jamie Ghione at 7:06 AM
Email ThisBlogThis!Share to TwitterShare to FacebookShare to Pinterest