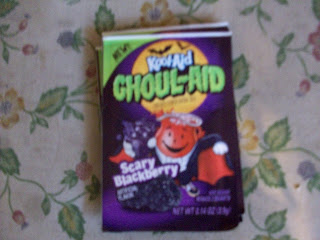 Last Friday afternoon at Target I spotted Kool-Aid's Ghoul-Aid in the Halloween section.  The stuff was free if you bought two packs off Kool-Aid Jammers, but I didn't want those, so I got the Ghoul-Aid for $1.00 for a five-pack. Still a pretty good deal.  The flavor is called Scary Blackberry.

When I got home I opened one envelope of the mix and added the necessary cup of sugar.  I let the stuff chill in the fridge overnight.  I also used some of the Kool-Aid to make ice cubes, something I'd found on Pinterest months ago and have been doing numerous times since this summer.  I let the ice cubes solidify overnight as well.

Here's how the Ghoul-Aid looked after being mixed in the pitcher.  It's kind of  purple or blue-looking: 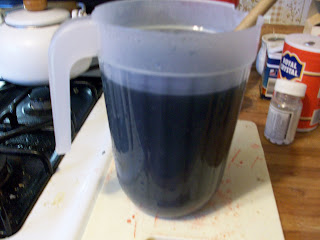 And here's a look at the ice cubes before going into the glass with lemon-lime soda: 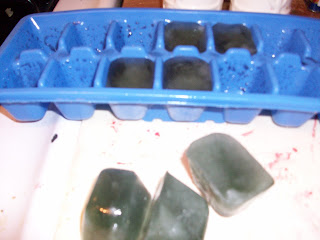 And after the soda was poured over the ice cubes: 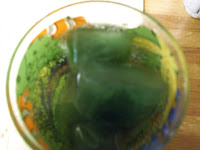 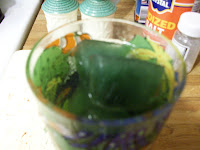 The stuff made good ice cubes and was pretty good by itself.   I haven't had blackberry Kool-Aid before, but it tasted all right.   I have four more packs of this stuff, so it looks like I'll be drinking this stuff all month long.  Not bad stuff.   It was worth the purchase for $1.00.

Posted by Jamie Ghione at 2:49 PM
Email ThisBlogThis!Share to TwitterShare to FacebookShare to Pinterest