Well, it's time again for the annual Countdown to Halloween. Click here for the list of participants.  Also, here is this week's assignment for the League of Extraordinary Bloggers.  I haven't been posting with the League because of a lack of imagination recently, but this week's assignment is Halloween-related, so it ties in with the countdown and makes a great subject for the first countdown post.  The League assignment for this first week of October is:

Remember when Halloween was a big deal? I mean, a BIG deal? What was the most legendary costume you ever wore? What would you dress up as this year?


Well, let me start by saying I've already made plans for this year.  Over the summer I was considering doing something from either the 1920s or 1950s.  I'd done a '60s hippie costume eight years ago and decided to try another decade this year.  I was almost certain to go with the 1950s this years when one day last month at the Goodwill I saw  a poodle skirt on their costume rack, which often includes stuff that aren't really costumes or incomplete used costumes.  More on that later.   Even though it was only September and I still wasn't sure what to be, after a while of thinking, decided the 50s it is.  I bought the skirt that day, knowing it might not be there the next day.  Now I am in search of a pink jacket and shirt to wear, preferably one in light pink and possibly one with pink stripes.  The skirt is black with  light-pink poodle, with a leash of faux pearls.  And of course some scarves.  See the photo at left.

As for legendary costumes I've worn in the past, well, let me include the ones I remember the most. Don't know if I'd call them legendary, but I'll interpret that as I please :-)  One was Miss Piggy when I was 11, another was Pebbles Flintstone when I was about seven. Another was clown costumes my cousin and I both wore the same year.  Hers was  made of blue polka-dot fabric, mine of red polka dots material.  Sorry for lack of photos, but I'm sure you can guess how long ago this was.  All my family photos are at my mom's house and I have no scanner (long story).  The Pebbles one, however, was from a burlap sack with images of dinosaurs drawn onto and cut out of different colors of felt and glued onto the sack. 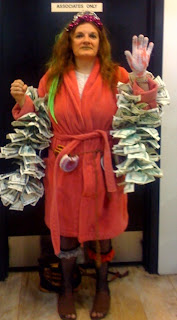 I'd also like to mention a ather unusual costume I did just four years ago:  The Seven Deadly Sins.  I'd already told my coworkers what I would be doing that year, but I knew others who saw me might not know what I was.  And not surprisingly the "What are you supposed to be?" question was asked several times that day.  This is in the photo at right.  The sins were represented as follows:

Everyone seemed to notice the money boa the most.  It's over six feet long and made up of about 100 fake bills.  Many people asked if the money was real and wished that had that much money.  I'd actually planned this costume in advance (hard to explain) and bought the money thing in June of 2008 from a  costume website. The site is in California about 50 miles from where I live in CA,  so the package arrived two days after I ordered it.  I wasn't home when the mail came that day and when I came home and saw a yellow package on my front door step, I knew it had to be the boa.  It arrives in the package flat, and must be fluffed out, which took me several weeks to do.  I still have the thing, not sure what else I could do with it.

FYI, I came up with a way to explain the costume to those who asked what it was supposed to be without getting tired of explaining.  This is one thing you have to be prepared for if you choose something unusual.  You might also get people thinking that you are supposed to be one thing and you will have to say, "No, I'm ___."  I strangely did not get this sort of thing that year, but a year later, when I donned the Pumpkin Spice costume. Some people thought it was a relative of the Flintstones or Jetsons, but others just asked what it was.  But someone actually knew what it was.  I wasn't counting on that to happen.

Looks I'm the second person to respond to this assignment.  Often I wait until others have responded so I can post links to their websites, something leagues bloggers are asked to do.  Here is the other response so far:
Hobgoblin


For more responses on this subject, check back later to the League link in the first paragraph.

Posted by Jamie Ghione at 2:09 PM
Email ThisBlogThis!Share to TwitterShare to FacebookShare to Pinterest

I was almost certain to go with the 1950s this years when one day last month at the Goodwill I saw a poodle skirt on their costume rack, which ... poodlecostume.blogspot.com

I was almost certain to go with the 1950s this years when one day last month at the Goodwill I saw a poodle skirt on their costume rack, which ... skirtcostume.blogspot.com