If you thought costumes for 2020 couldn't get any worse than what was shown in yesterday's post, now comes this: 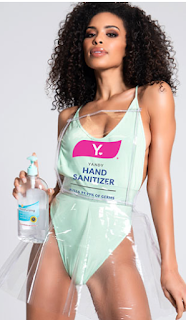 The Sexy Hand Sanitizer costume at Yandy, a company known for making really skimpy women's costumes. It seems like every year, costume makers find ways to make everything sexy and that nothing can escape this. Who would have imagined hand sanitizer costumes going skimpy like this? And with an almost invisible skirt! Everything for women has to be made this way, so think the costume designers. And as I pointed out yesterday, there is this one: 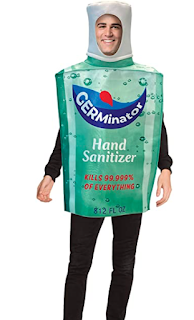 I don't want other one, but if I did, I would want the one below. Saying it's just for men is stupid! I have always believed humorous costumes were intended as unisex. Many are labeled as such, but the packaging and the pictures on Internet sites almost aways show a man modeling the costume. And stores often place unisex costumes in the men's aisles. I say, if you want the non-skimpy one, get it. It's your right to wear what you want. I feel chilly just looking at the one on top, which looks like nothing more than a bathing suit. 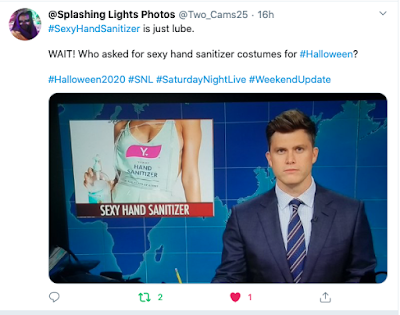 And Yandy also has this: 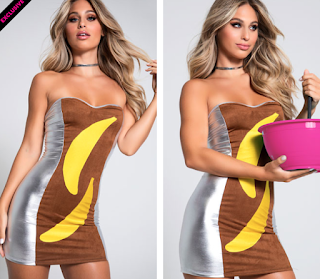 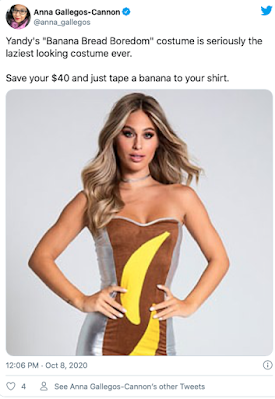 And yet another at Yandy is a sexy mail-in ballot. Again, JUST NO!

If I want to do any of these (I and certainly don't) but if I did, I'd just make my own, since I can spend less than $30 to $40 to so. And I can find a way to avoid the sexy angle. A ballot costume could be easily made from large white poster board, which you can get at Dollar Tree.

I was at least glad to hear that Yandy won't be making "sexy" coronavirus costumes. But they are still making sexy costumes based on other events that have occurred during the pandemic. Yandy doesn't appear to have made a sexy toilet paper costume, but this homemade one comes awfully close. Now is anyone going to try to "sexy-fy" the hand wipes bottle costume? That could be weird!

Upon further Googling, I came across this:

Now this one is more covering and is designed for women (the site sells another is designed for men). It's a little too pricey, but I'm glad to see it exists.
Posted by Jamie Ghione at 2:28 PM
Email ThisBlogThis!Share to TwitterShare to FacebookShare to Pinterest

Definitely NO. In capital letters.

I don't even know what to say about these. They are bad.

Banana bread? Wouldn't have figured that one out.