I will be doing this again, despite how few books I read for this challenge this year. As always, I will get as many as I can through the year. 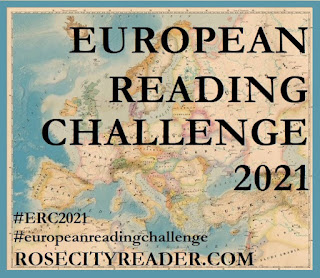 THE GIST: The idea is to read books by European authors or books set in European countries (no matter where the author comes from). The books can be anything – fiction, nonfiction, novels, short stories, memoirs, travel guides, cookbooks, biography, poetry, whatever. You can participate at different levels, but each book must be by a different author and set in a different country – it's supposed to be a tour. (See note about the UK, below.)

NOTE: Even with Brexit, the United Kingdom is still one country, part of Europe, that includes England, Scotland, Wales, and Northern Ireland. One book from any one of these four counts as your one book for the United Kingdom. I'm not going to bust your chops about it because challenges should be about fun not about rules. However, when it comes to winning the Jet Setter prize, only one book from one of the UK countries counts.

LEVELS OF PARTICIPATION
Participants can read as many books as they want and are encouraged to visit as many European countries as possible. The Jet Setter Prize will go to the person who reads (and reviews) books from the greatest number of different countries (see below).

Not everyone wants to compete for a prize, review books, or read a lot of books. You can complete the challenge by reading one to five books from different countries.

To participate in the challenge, sign up at the levels below. If you want to go on to compete for the Prize, keep reading!

Calling challenge complete on November 11
Posted by Jamie Ghione at 3:27 PM
Email ThisBlogThis!Share to TwitterShare to FacebookShare to Pinterest

So how many books have you read this month?;)

Thanks for signing up again! Welcome to the tour!

I am super impressed at your range.

Hi there! I've also signed up for the European Challenge and think the "travels" through Europe can be lots of fun.