Graduation Robes in the Halloween Racks 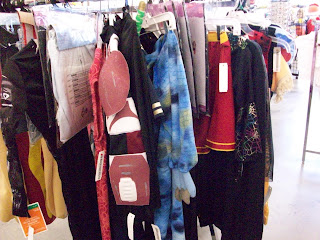 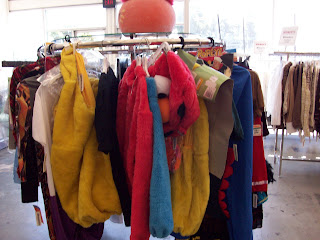 The Halloween racks at thrift stores seem to be filled not just with used costumes (as you can see in the photos on the left), but also with Halloween t-shirts, articles of clothing that seem passable for a costume (but you're just not sure what they could be used for) and graduation robes. I'm sure one or more of those items are hidden in these pictures.

I once wondered why graduation robes get thrown on these racks.  Then I guessed that these could actually be used for something.  White ones could be used for angels, and red ones could be used for devils.  One year, I decided to be the half-angle/half-devil (also called other names such as "Heavenly Devil"). I bought two thrift store graduation robes (one white and one red, of course) and cut them each  in half, sewing each half down the back.  I made a devil cape from the other half of the red robe. 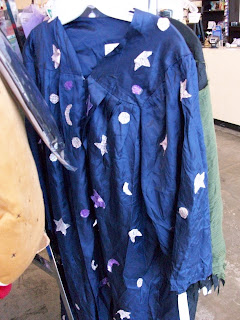 Well, it seems someone else got the idea that these robes can be used for different costumes,  as one day at Goodwill I spotted a navy blue one that someone had used to make a wizard's robe, by decorating the robe with cut-out stars and moons.  See the photo at the right. . I also donated my devil/angel costume after I wore it.   I don't know where it ended up or if anyone bought it, but someone might have.  I hope they could tell it was made from graduation gowns.

EDIT: I got ahead of myself.  I went down to the Goodwill about an hour after originally posting this.  The wizard robe is still there.
Posted by Jamie Ghione at 12:40 PM
Email ThisBlogThis!Share to TwitterShare to FacebookShare to Pinterest