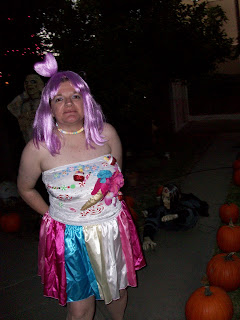 Here I am as Katy Perry from a  party put on my my county's Democrats last Saturday.  The invite through Facebook said that costumes were optional and I was the only one in costume, except those who performed in the haunted house.

I've never been a celebrity for Halloween before and am now wondering if I will see others disguised as a celebrity.  In 2009, I'd hoped to see  a lot of Michael Jackson and Billy Mays, but not one of either. No Farrah Fawcett either. No Lady Gaga last year.  I must not be in the right places for these costumes.

It is now being said that Charlie Sheen is the top costume for 2011.  I've already seen the Sheen accessories at the Spirit Halloween store.  The one I've been to has the Sheen accessories on an endcap with a life-size cut-out of the actor, referred to as "Sheen's Korner." I first spotted these in September after the store opened and Tweeted this info to my followers on Twitter and one follower declared that he's got his costume for this year.  I'm now wondering how many Charlie Sheen impersonators I will see, but I now suspect I won't be in the right place for these costumes.  But there must be some people going as Sheen as several websites have said the Sheen mask (pictured at right) is sold out.

The above link also says:


In a growing trend toward pop-culture references, top choices for women include Katy Perry, Lady Gaga and Snooki (or any member of the gang from the "Jersey Shore" cast). ... 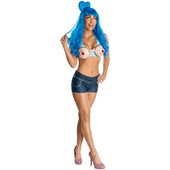 I now wonder if I'll see another Katy Perry this year.  I actually though of getting the cupcake bra or even attempting to make one myself like this.  I decided it would be too for this one, though, and went
with the candy dress, which I bought at the Spirit store, where I also got the lavender wig.  I added the candy necklace, which I had a hard time finding till I looked at Safeway.  A premade cupcake bra costume is available but only sold on Spirit's website.  The website BuyCostumes.com also has it for 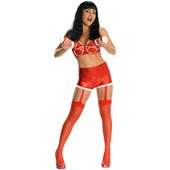 sale.  BuyCostumes also has the whipped cream costume from the "California Gurls" video.  What are the chances I'll see one of these or another girl in the candy dress?

Amy Winehouse is also expected to be popular.  It seems every year a recently deceased celebrity inspires costumes for Halloween, but once again I wonder if I will miss seeing anyone was Winehouse the way I missed seeing any Michael Jackson, Farrah Fawcett or Billy Mays two years ago.  Pictured is an Amy Winehouse costume from Amazon.

The Spirit store devoted an endcap to "Jersey Shore."  Though I've heard all the hype over the show, I've never seen it since I don't have cable and therefore won't know if I see someone as one of the characters. They will probably think I'm weird not to know, but they will have to understand I have no cable.

Who else can you expect to see?

Posted by Jamie Ghione at 8:10 PM
Email ThisBlogThis!Share to TwitterShare to FacebookShare to Pinterest