Welcome to the Countdown to Halloween  for 2011. I am participating once again (my third time) and  anxious to see what other participants are coming up with.  Here is my entry for Day One. 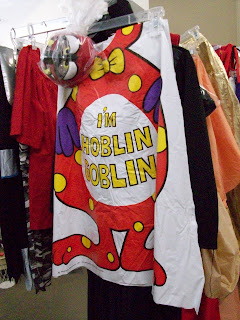 Over the last few weeks I have been looking at Halloween displays at thrift stores as I have always been curious what they will put out for this each year.  I already have some photos taken for upcoming entries. Today when I went to one such store in my hometown, I saw something unexpected. On one of  the racks among used inflatable-muscle costumes, used Spider Man costumes and graduation robes was a total blast from the past.

In the photos is an old-style costume consisting of a vinyl smock and a plastic mask.  Many of you old enough to remember  Ben Cooper and Collegeville and some lesser-known costume makers such as Halco  will remember these old-style costumes which had a picture of the character or actor represented.  Almost every personality imaginable was depicted on one of these costumes, though some seemed questionable as to whether someone would say "I want to be __ for  Halloween."   And most likely there were some characters that didn't get bought at all (or just barely) and 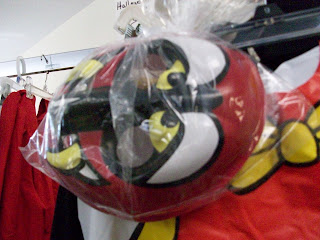 ended up as the leftovers, the ones that the last-minute shoppers got stuck buying.

Out of curiosity, I looked at the costume and at the bottom of the smock,  I saw that it had a 1981 copyright date, but forget what company made it.  I'd seen the smock upon arriving into the store and only a short while later did I see the mask, then looked again at the smock and saw the date.  I had no idea what this "Hoblin Goblin" was at  first, so I Googled "Hoblin Goblin Costume"  and came up with this.  Sorry for lack of info. I know this is one I would not have wanted to wear back in the day, but someone must have, if it ended up in a thrift store 30 years later.

I don't ever recall wearing any of these store-bought costumes, even though they were around for quite a long time.  And I just can't imagine this concept today, with characters such as SpongeBob.  Yet, seeing this was amazing, since I'd never seen one of these in a thrift store.
Posted by Jamie Ghione at 3:22 PM
Email ThisBlogThis!Share to TwitterShare to FacebookShare to Pinterest