Since we're having a Halloween potluck at work tomorrow, I decided to make one of these cakes after seeing the Pilsbury Halloween Funfetti cake and frosting at Target the other day.  I bought these and began working on the cake when I got home today.  I'd worked longer than expected, but had to make time to make the cake for tomorrow. 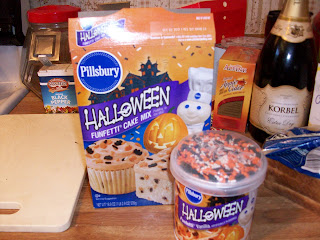 I have a bundt cake pan,  two muffin tins,  two round pans, and pan for making a sheet cake.  Since I'd bought the stuff two days ago, I had two days to decide which kind of cake to make.  I'd thought of making cupcakes, but did not get around to buying any cupcake liners, so before I began making the cake, I chose to use the two round pans and make a two-layer cake. I then followed the baking instructions on the box.

One thing I must admit is that I like making cakes, but only every so often.  I'm no expert, so I only do what I can.  Just carefully reading and following the instructions should keep from messing up the cake.   But whenever I do make a cake or cookies, they turn out fine in the end by following instructions.

After the cakes were done baking, I left them on the stove to cool before frosting them.  Then placed one of them on the base of  the plastic cake-saver and proceeded to frost that half, for the bottom layer of the cake, then placed the other half and frosted the remainder of the cake. Frosting the side of the
cake was somewhat difficult.  I then opened the Funfetti candy bits and  spread them across the top of the cake.  The sides looked bare, so I put on some of the candy corns I got at the store yesterday.  I wasn't sure  how to add the spread the candy bits on the sides without the bits spilling all over.


Posted by Jamie Ghione at 4:42 PM
Email ThisBlogThis!Share to TwitterShare to FacebookShare to Pinterest