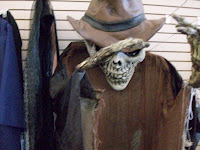 The Goodwill store in Hollister, California has been putting up scary decorations each year for Halloween.  Pictured in this entry are the ones displayed this year.  I began taking pictures of these last month when I first saw them.

The skeleton seen in the photos has been moved around since the first two pictures were taken.   In  the first two, he was hung near a display of graduation robes and used gothic costumes.  In the third, he was hung above a display of decorations on a gondola, with feather boas on the endcap.  Also in this pic, he is holding a Halloween promotional poster from Goodwill. 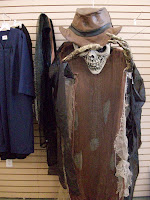 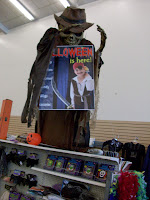 Seen hanging on the end of a  rack of men's clothing is a stuffed vampire. 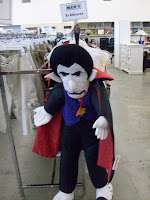 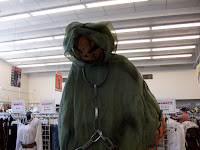 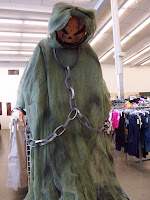 At right are two shots of a scary creature with a pumpkin head, wrapped in chains.
Posted by Jamie Ghione at 2:51 PM
Email ThisBlogThis!Share to TwitterShare to FacebookShare to Pinterest